On January 2nd, 2013, Steph and I ventured through Morocco Canyon.

The approach looks improbable from below, but proved to work just fine. Thanks to Luke Galyan for the excellent beta, we greatly appreciated the detailed approach photo.  Below is Steph making her way across the most exposed part of the approach.


The rest of the route is very scenic; it is one of the best in the North Wash. The obstacles are challenging, and the rappels are rapid-fire. We loved this canyon and can't wait to do it again. 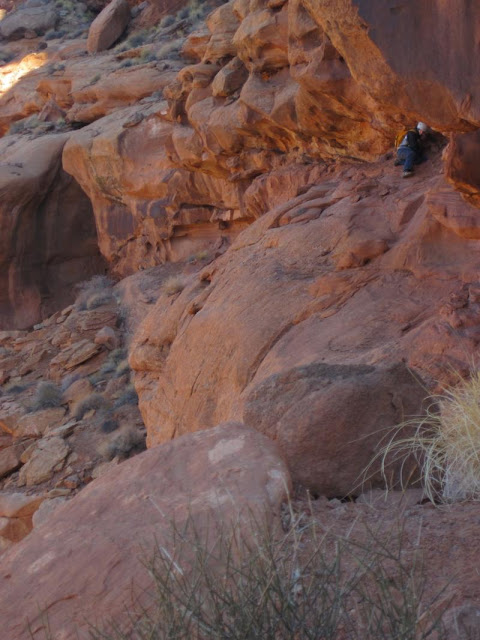 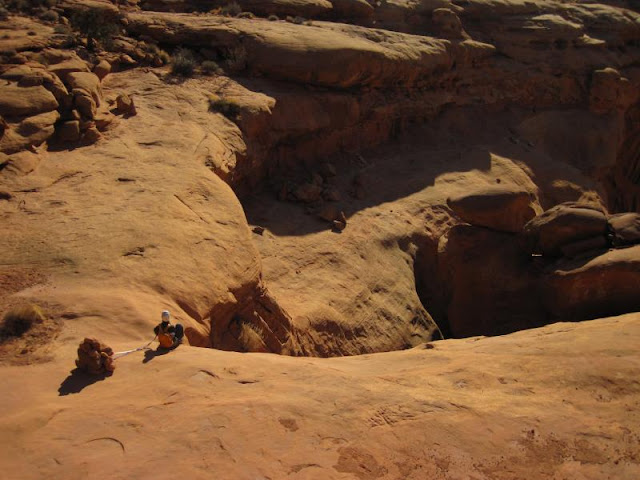 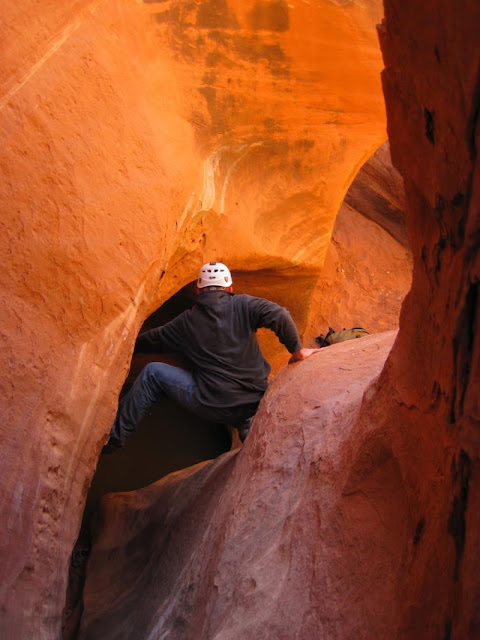 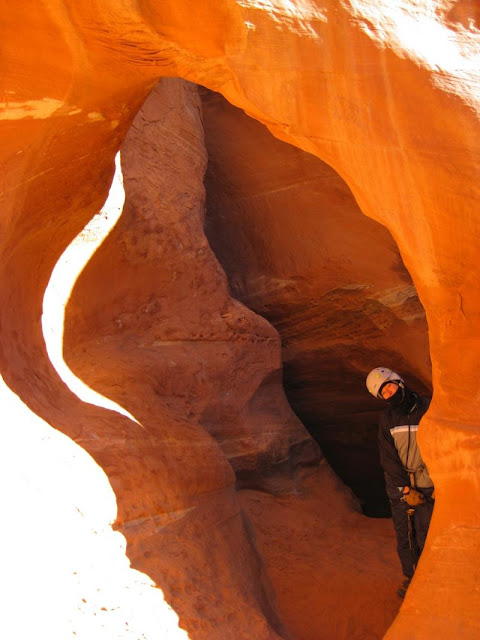 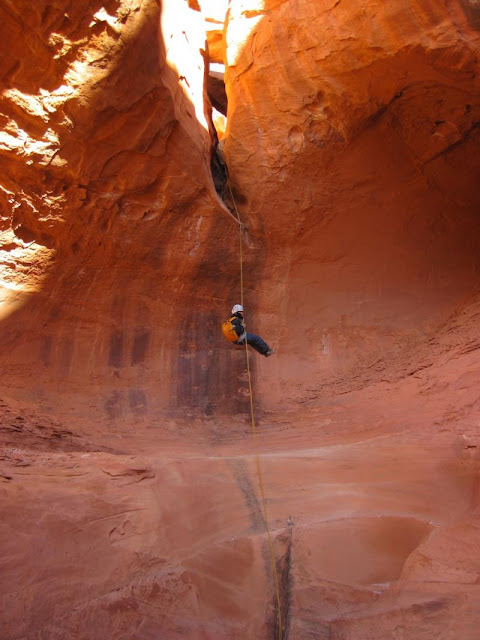 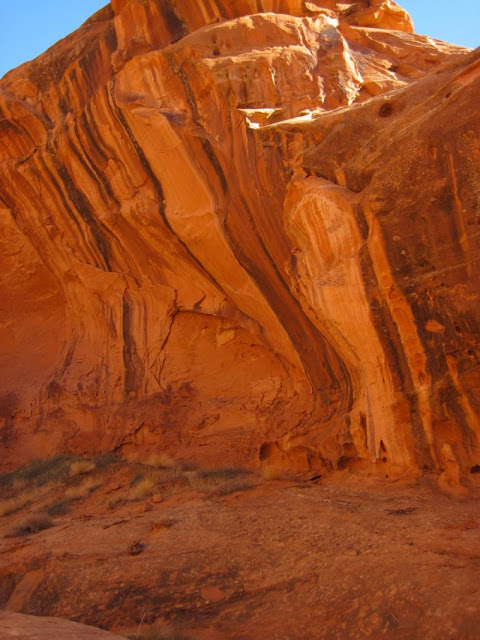 For us this was some challenging stemming.
Looks like someone fell in the day before?
Steph also made it across, high and dry. 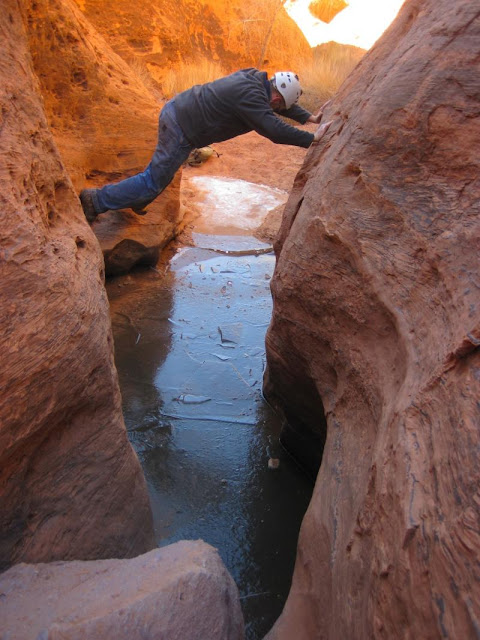 With some effort, we earned our "Dry Shoes and Rope" merit badge. 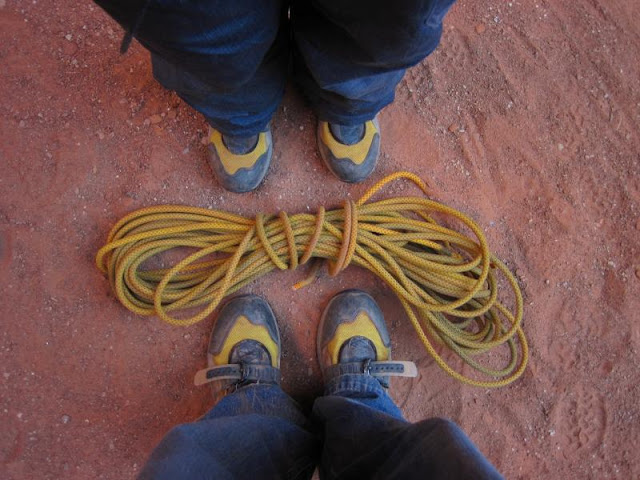 On New Year's Day, 2013, Steph and I took a leisurely hike through Hogwarts.

At the first rappel we were greeted with an obnoxious blue anchor. It appears that the group that built it did so in order to keep their feet dry, because it bypasses a water-filled pothole at the head of the drop. After that group used their anchor, they left a rope groove, and subsequent groups have as well (see the lower left corner in photo #1 & #2). I cut out the blue anchor and we began looking for a better spot. 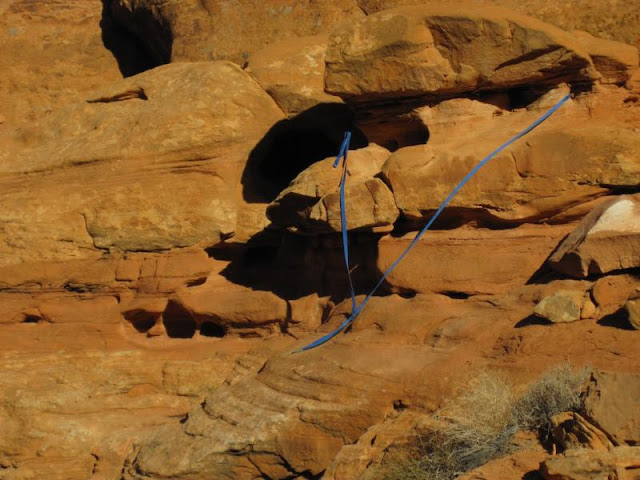 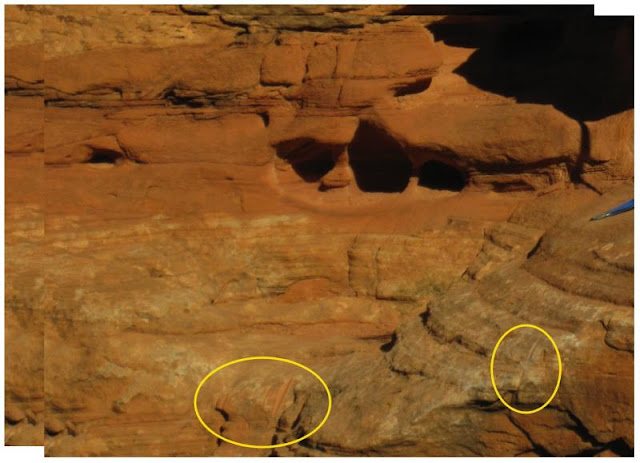 The problem with trying to bypass the pothole is that starting the rappel can be very awkward/dangerous if your anchor is extended over the edge. If you leave your anchor short, you simply can't avoid grooving the lip around the first drop.

Steph selected a nice rock at the top of the drainage and we put a green sling around it. The rock is above a very convenient shelf and makes starting the rappel very simple. However, there is the aforementioned pothole below. I saw that the pothole below was frozen, and hoped that it would hold my weight. It held about half of my weight, but it wasn't a big deal; my shoes and ankles got wet. I was able to gallantly get Steph across without her suffering the same fate. The pull was very easy and clean. Moral of the story: Do your best to prevent rope grooves, even if it means getting your feet wet. 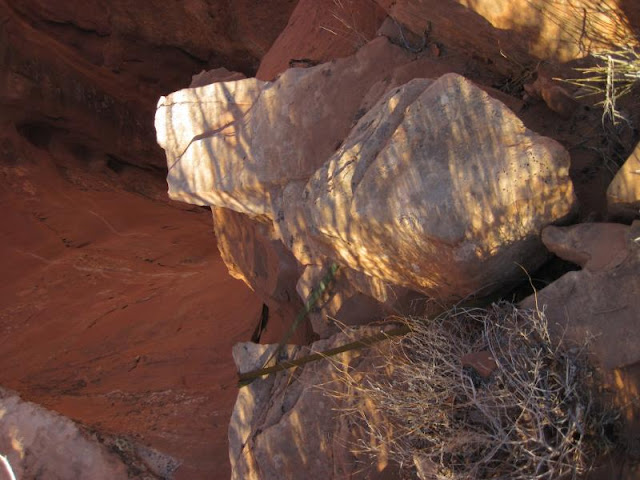 The arch in Hogwarts is possibly my favorite feature in all of the North Wash. It is spectacular! 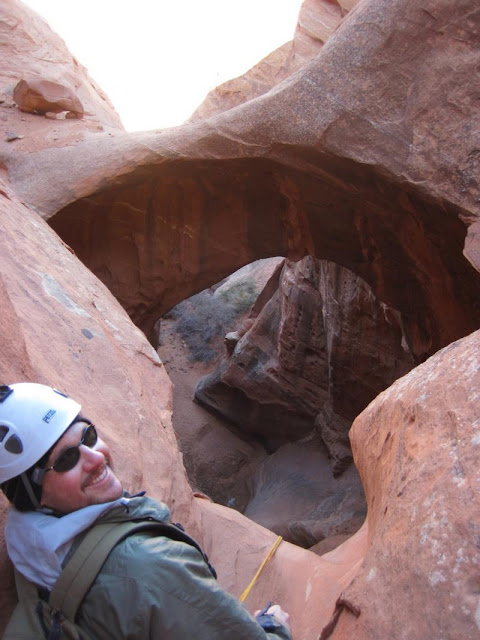 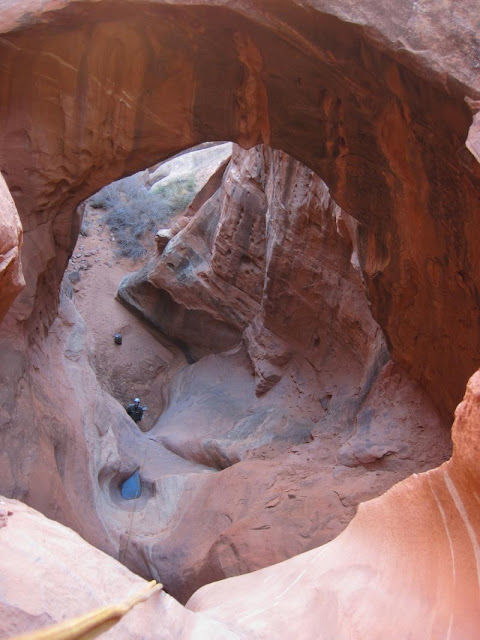 If you look closely, Steph is at the top of the rappel. 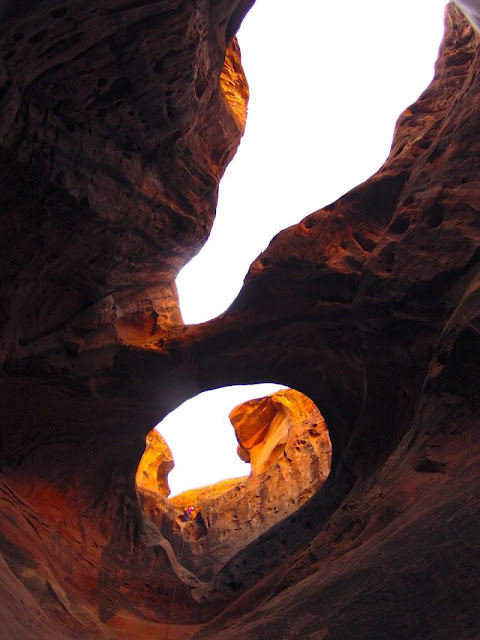 Afterwards, there is an interesting keeper pothole in the middle of the canyon. I mentioned to Steph that people sometimes stem over the pothole. She looked across the pothole at eye level and said "Not possible". I pointed higher, at the only possible route, some 20 feet above the mud in the bottom. You should have seen the look on her face- pure disbelief.

Since neither one of us like wheelchairs, we tossed a pack across. I didn't load much into my pack, so the rope only provided about 6 or 8 pounds of tension. I hooked ascenders and aiders to the rope, but the foot loops were useless because the rope wouldn't hold my weight. I'd step in and pull the rope back towards me and slide to the bottom of the pothole. I eventually just climbed out and used the 8 lbs of rope tension and top ascender to the best of my advantage. (yes, I could have redone the whole damn thing, but didn't want to.) The final move was a mantle starting with the entire underside of my left arm on top of the exit lip of the pothole. Tough for me, but I'm a crappy climber. 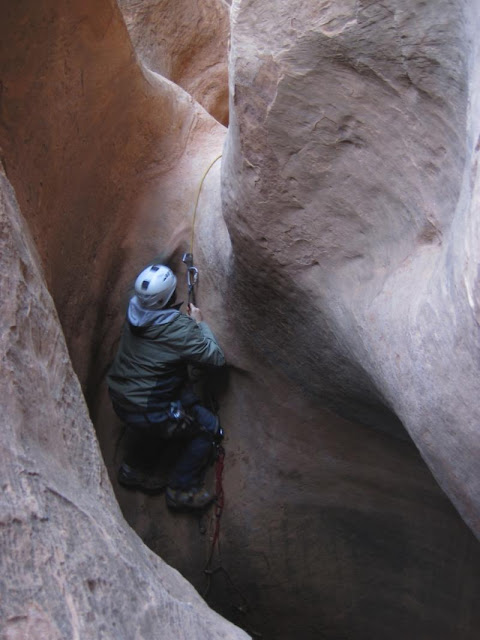 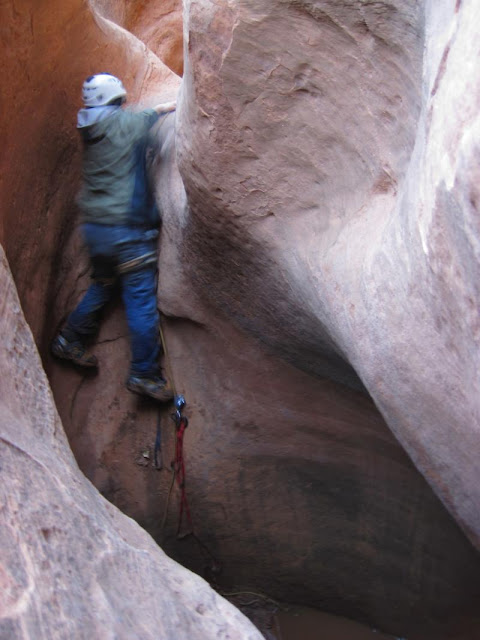 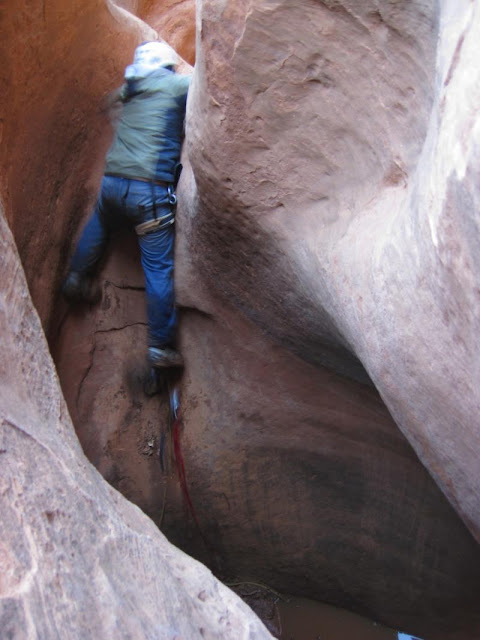 Thumbs up if you didn't fall backwards into the mud. 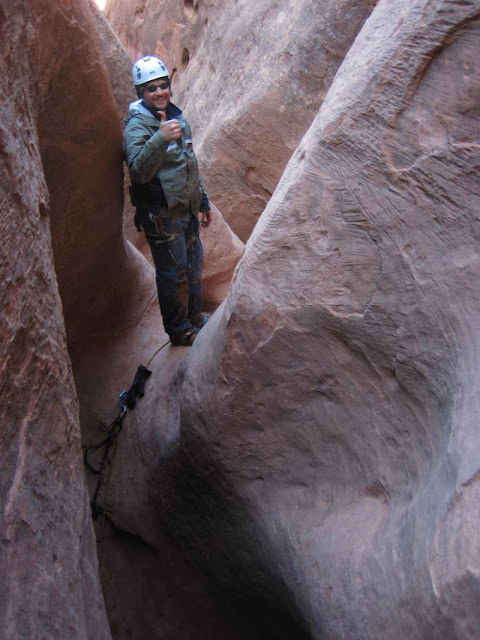 In my opinion, Hogwarts is a North Wash Classic. It is in pristine condition. The rope pulls can be tricky- be a good canyon steward and take some time to think about your setup and pull. If you leave a groove in there, you're simply not paying attention.
Posted by Bob Allan at 7:22 PM No comments: