On March 19th, 2014, Tony and I did a lap through Purgatory Canyon. It was fun canyon with very sculpted walls (the photos do no justice). Knowing it was dry we headed through with minimal gear.

The final 110ft rappel was interesting. We rapped from a stone that was wedged into a crack on the floor of the canyon. Something a little new to us. The stone that the previous grouped used was no bigger than a baseball. I selected a much larger stone, simply to make myself feel better, and it worked just as well.

It was a great day with a great friend. 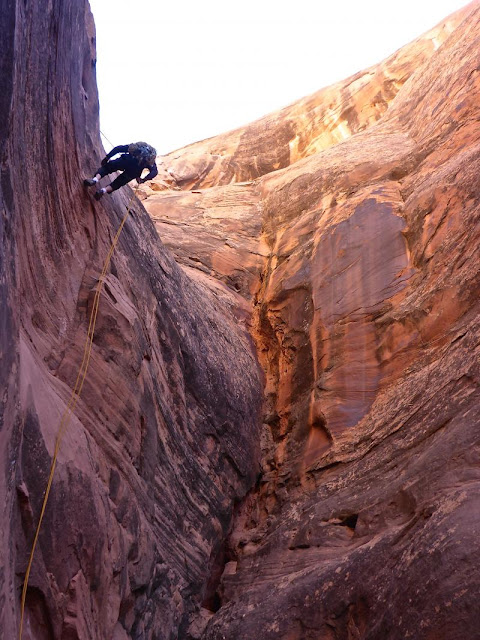 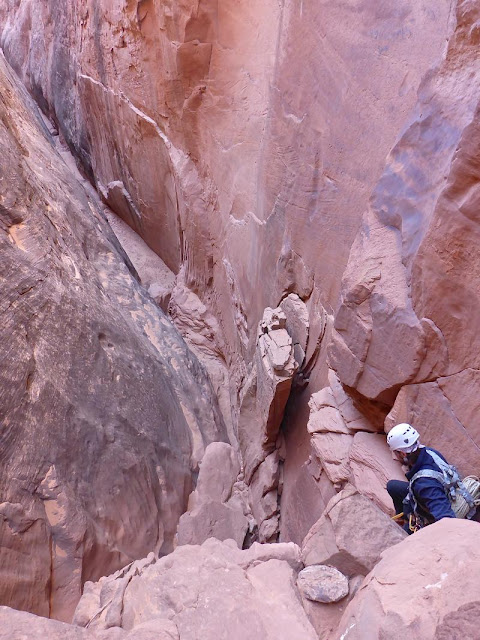 Tony rapping under an unusual rock.
The 'clamshell rappel' has a good ring to it. 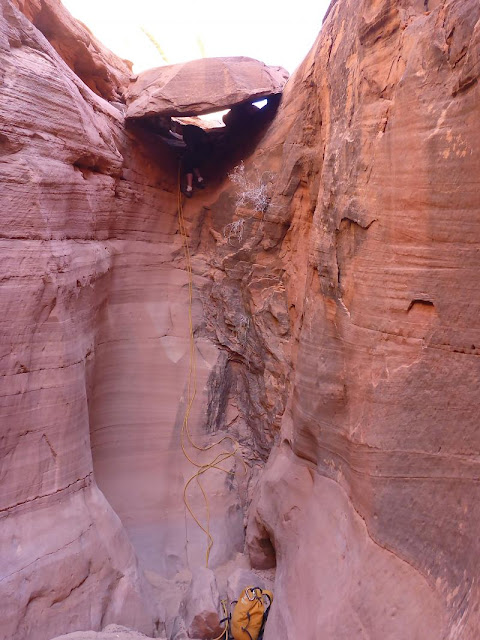 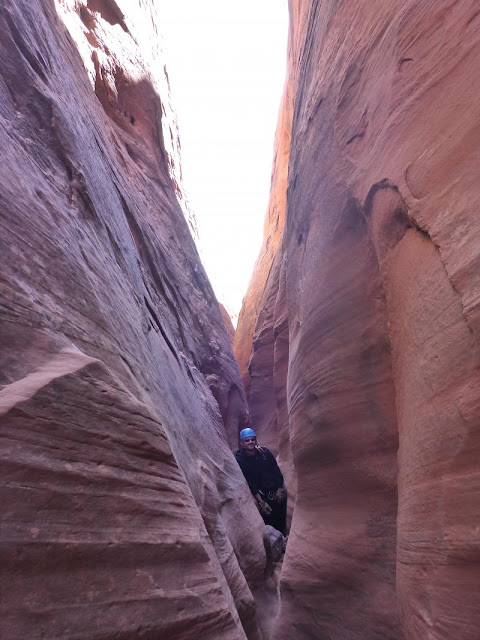 The vistas around the Dantes are stunning.
If you look closely, I'm in the pothole far below. 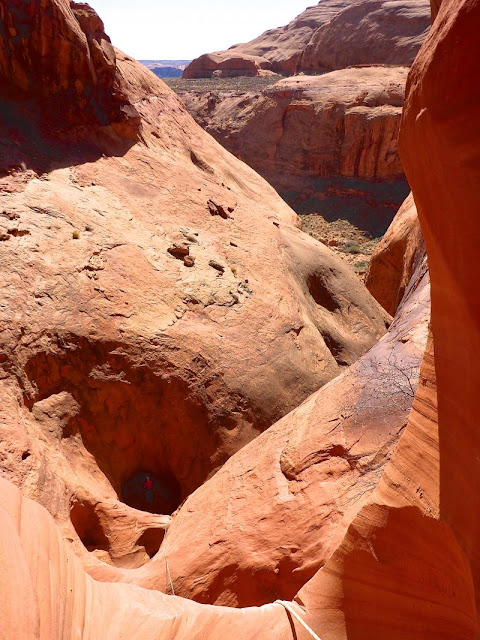 Both are nice little canyons, a great combo for a cold windy day. Just a few pictures to share... 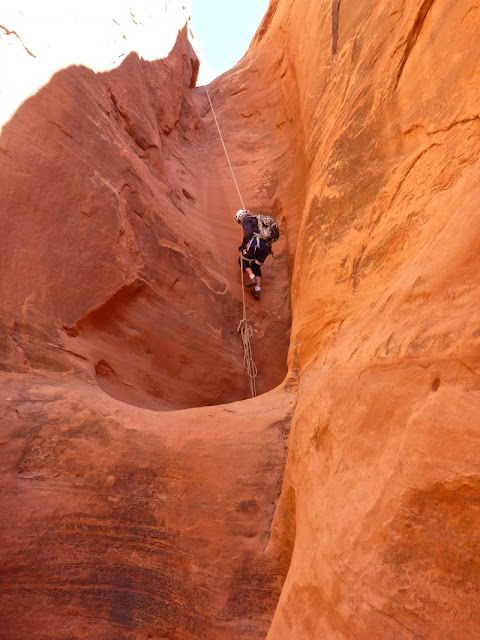 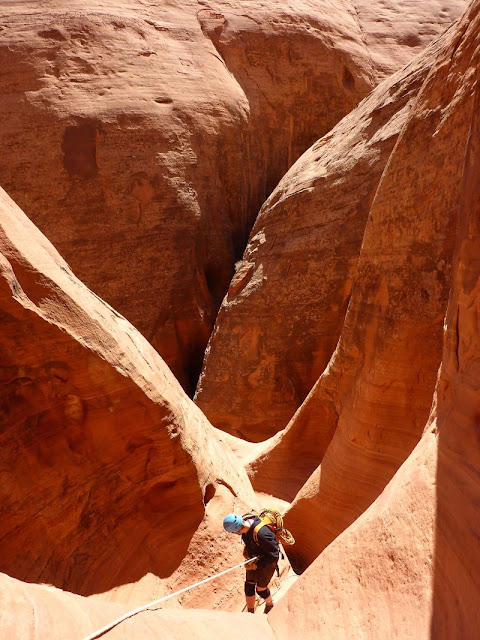 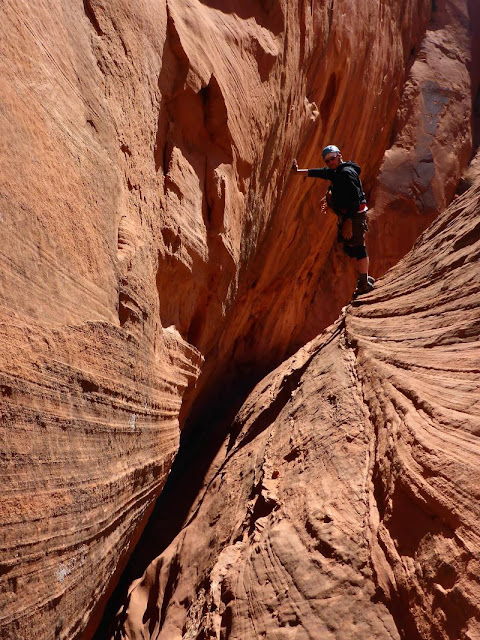 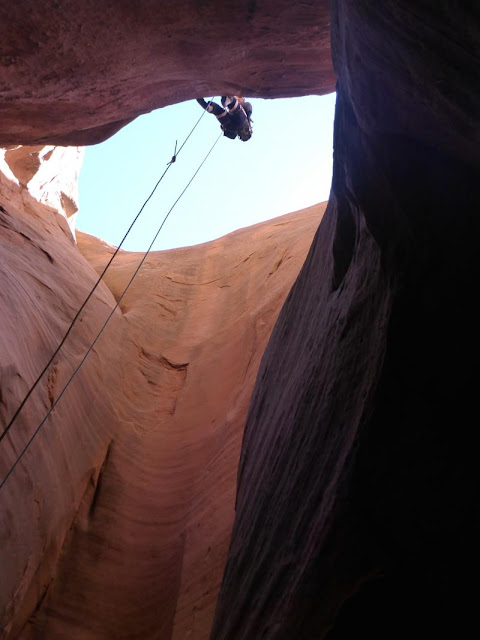 A luxurious stretch of easy narrows in Hog 2. 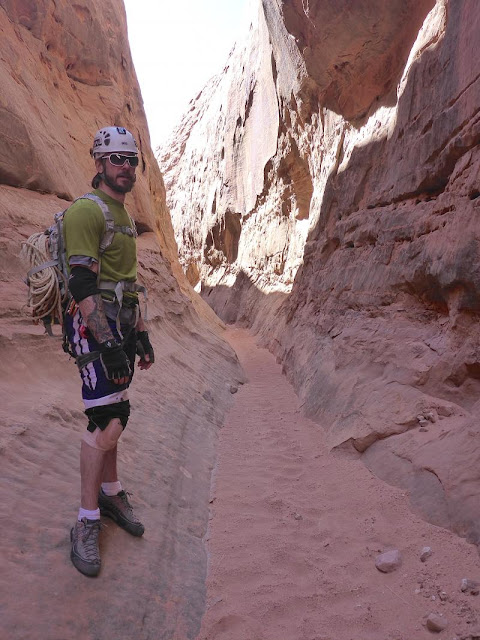 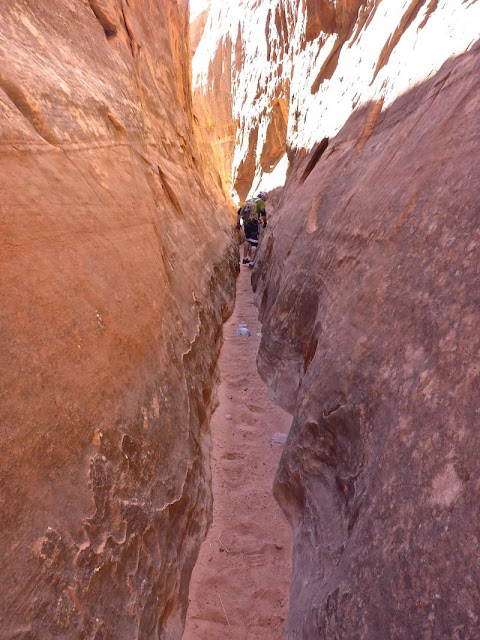 Where is the bottom of this chute?? 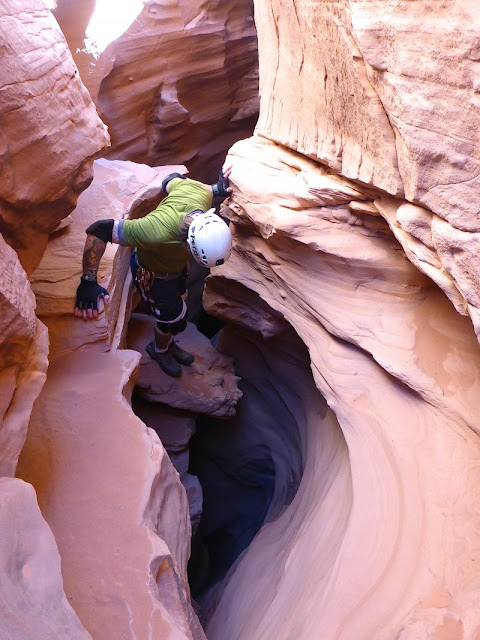 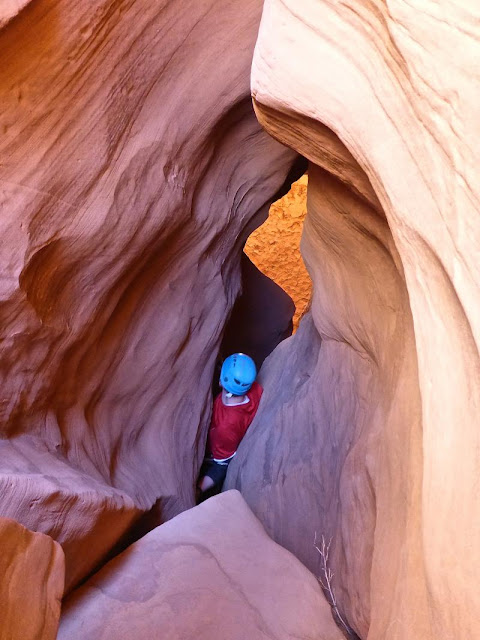 On March 17th, 2014, Tony and I wandered out across Smith Fork then descended Pothoez Canyon.

Smith fork is a stunning complex of canyons when viewed from above. The possible adventures seem endless.

Unfortunatley Pothoez is not as scenic as the surrounding landscape. The top half starts out with difficult high stemming that's ugly and rotten. We had a couple of large flakes break off when stemming 30+ feet off the deck.


Tony working hard with a big pack in Upper Pothoez. 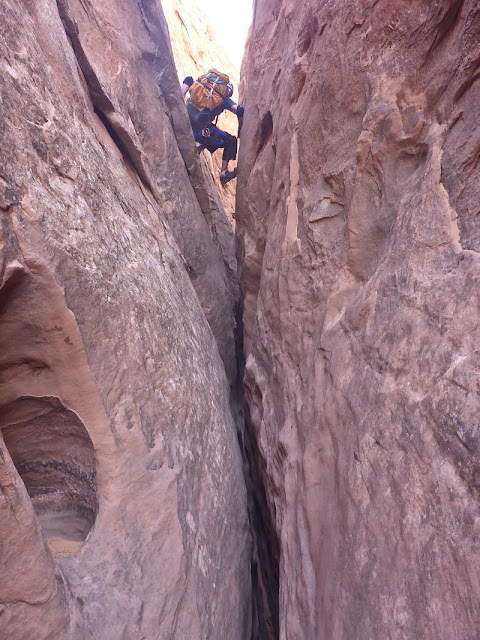 That is followed by a couple of hours of stemming over small potholes, 4-6 feet wide.
Being 3 feet off the deck for 2 hours is a serious shoulder/core workout. 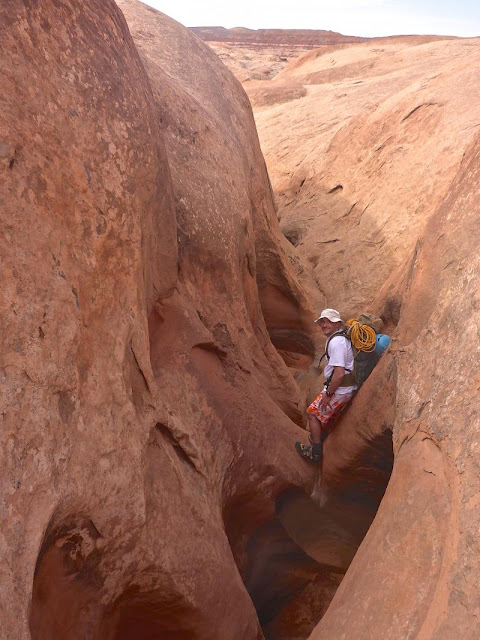 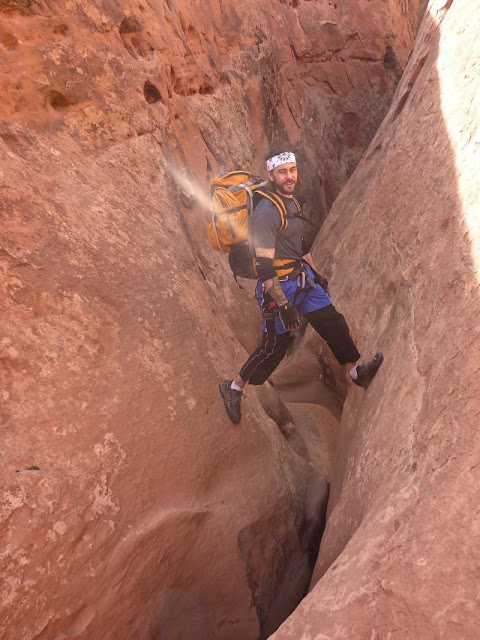 Then comes a 30 foot rap with no anchor options.
It would be a downclimb/capture with a large group, but for us,
it became a tricky SandTrap problem (fun!). 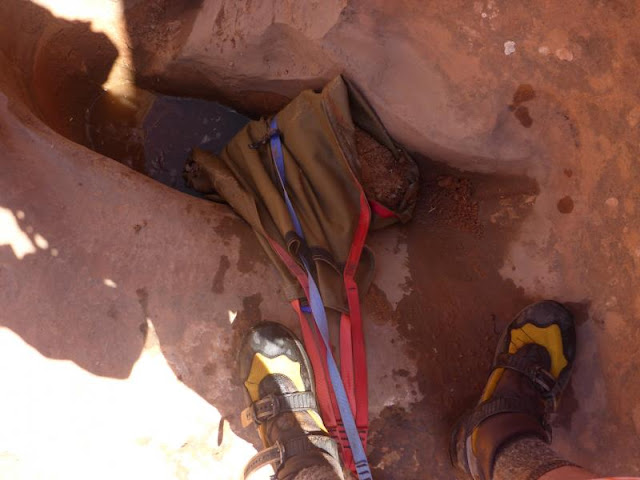 After that is the only pretty part of the canyon, a downclimb into a large cold swimmer. 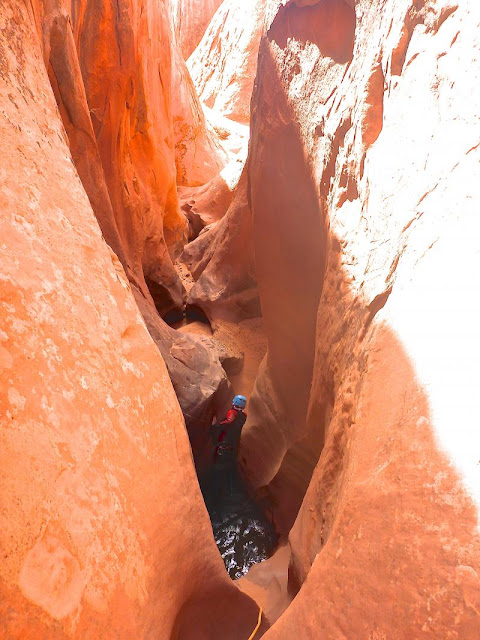 Shortly after the swimmer is a SERIOUS pothole located halfway down the final rappel (sorry no pictures of it). It is SEVERELY overhung on all sides, a million feet deep, and should one fall in it would be impossible to escape from. Traversing across the pothole proved to be VERY tricky for Tony because the line of the rappel funneled him into the middle of the pothole. Throwing potshots across first would have been of limited utility because the force needed to propel Tony to the exit lip is greater than Potshots could provide. It was the most frightening pothole I have ever seen.


At the end of the day we wandered over to the exit for Phycho D and took a few pictures.
It was FAR more scenic than anything in Pothoez. 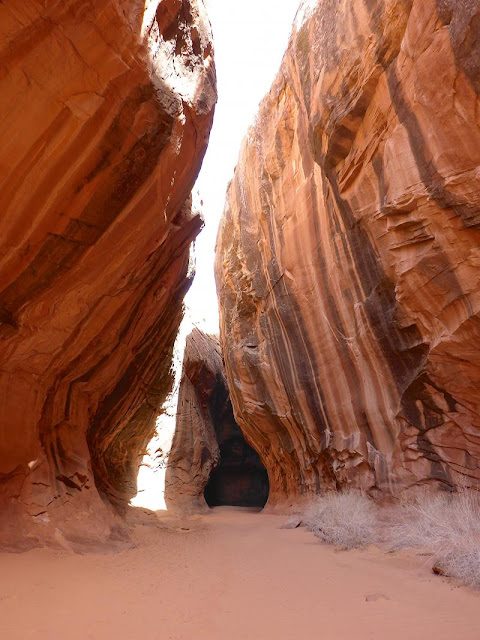 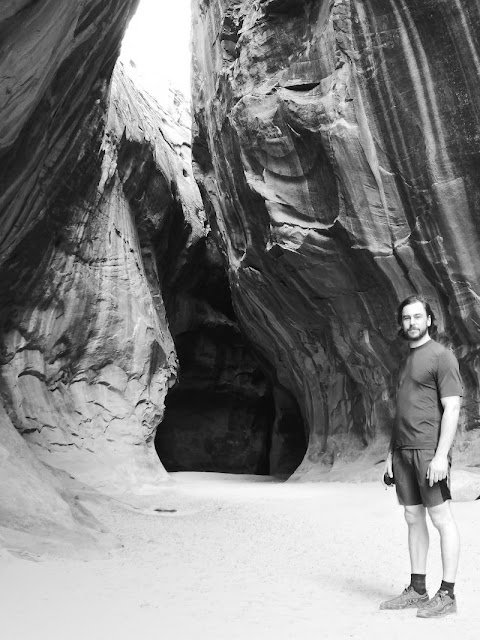