Sometimes I'm so happy when we finish a hike that I kiss my truck upon our return. Saturday was one of those days. On June 1st, 2013 Steph and I romped through The Squeeze. Arguably... it romped on us.

Just like individual people, every canyon has a personality. Mystery is charming and easy to be around. Shenanigans is a control-freak. Das Boot is like a blues guitar player; cool, smooth and unfettered. The Squeeze is like a billionaire's trophy wife. It's unspoken every minute of the hike:

"Mister, you're gonna pay if you want to play."

For just the two of us, this canyon was a daunting task. It's really a table set for four.

Knowing it would be a long day, we felt up to the task. Steph was amazing, bombing into potholes and delicately mantling out unassisted. Soon we arrived at the 'tough keeper'. The water was 18 inches below the exit lip, making a solo escape impossible. Steph dropped into the pothole and notified me that it was very cold, much colder than the other water that we had encountered. The clock was ticking as I readied a pack toss.

The ledge from which you launch your pack is very awkward. You must throw it hard to the left towards the exit lip, about 10-o'clock, from a fairly tight stance. One try... not far enough. Two tries... no. Three tries... splash! Not even close. Time to try a potshot. Good thing she's wearing a 7mm suit, or she would be frozen by now.

After 3 throws with a potshot, I land it on the far side of the exit lip. Steph has been in the pothole for 20 minutes and is beginning to get chilly. The lone potshot is 1/2 full.

Steph verrrry delicately pulls on the rope attached to the potshot. "Good enough" she says. Amazingly, she pulls herself out of the pothole and delicately places her elbows on the smooth exit lip. With the balance of a ballerina, she gently shifts her weight forward and mantles out of the pothole. From my perch I marvel at my wife's athleticism, my arms on fire from throwing stuff.

We were very busy during this canyon. I only had time to take 4 photos: 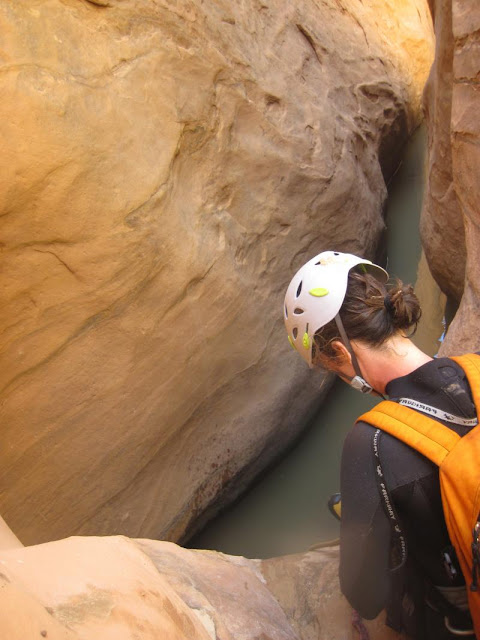 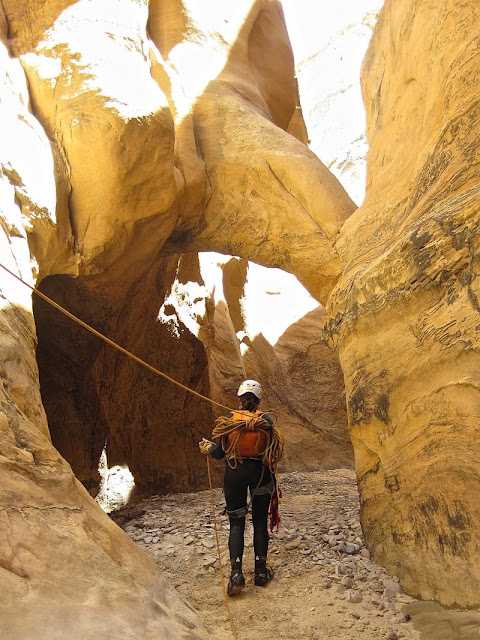 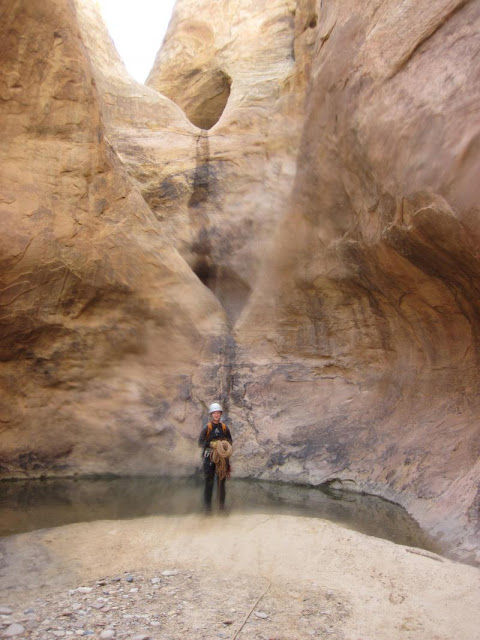 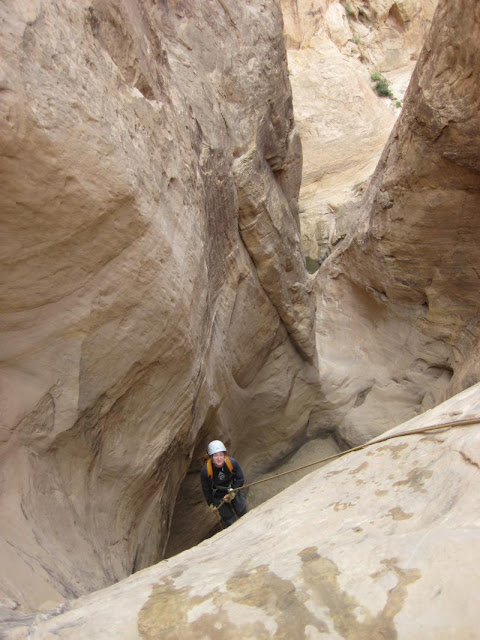 We FLEW through the technical portion of the hike in 6hr 45min. Our round trip time (from Factory Butte) car-to-car was 12hr 20min. We wandered a bit, but not a lot. The approach hike from the Factory Butte TH is awful.

We completed about 18 rappels. Maybe more? Two small rope bags would have saved us about 30-45 minutes.

This hike is NOT suited for a team of 2. If one of us had suffered an injury, it probably would have been a disaster. Many partner assists are required to complete this canyon. A 4-6 person team is strongly advised.

Leap-frogging rappels would have saved us another hour (if we had a third 100-foot rope and a team of 4).

Bring at least 4 liters of water per person. You'll be working hard in a wetsuit for about 6 hours and you'll sweat most of the 4 liters out.

It's a LOT of work for a lot of good canyon action. Enjoy!