On December 28th, 2018 - January 1st, 2019, Steph, Tony, Byron, Nipun, Jared, Molly, and I braved the cold and did a few canyons.  It snowed about 2 inches on the evening of the 27th, making things a bit more treacherous than we had expected.  We were hungry for a challenge because we hadn't been canyoneering in 14 months, so we opted to descend Middle Leprechaun Canyon.

The morning temperature was 5 degrees.  Getting into Middle Lep was dicey because the snow on sandstone was about as grippy as polished ice.  Gusting winds filled the slot with fresh snow which was a foot deep in places.  It wasn't bad until we got to the skinniest sections which were full of slush.  Slush covered boots were very difficult to stem in, so getting up and over pinches was far more difficult than we had expected.

At some point I realized that a broken ankle in the slushy skinnies would have been a disaster.  It was difficult to remain warm when we were working hard.  If someone had been seriously injured, hypothermia/frostbite/death would have been real possibilities in those temperatures while awaiting rescue.  We had a great time, but the risk was extraordinarily high for the reward.  Please don't copy what we did in Middle Leprechaun.

Much of the snow blew off during the following days.  We did Hogwarts, Boss Hog, Razorback and East Blarney.  All were excellent choices given the conditions.

Jared and Molly (who is expecting) joined us on the 31st.  They are both new to canyoneering.  We made an attempt at Slideanide, but the fresh snow made getting in/out far too risky.  We tried to visit Arsenic Arch, but even that was too risky with the snow.  Nevertheless, we had a good hike and enjoyed the views.

On January 1st, we descended East Leprechaun which was a fine choice given the conditions.  It was great to see Jared and Molly experience their first skinny slot.

We ended up doing six canyons in 5 days.  So satisfying!  It was another great adventure with friends new and old.


On our way to Middle Lep it warmed up to 7 degrees.
The highway was covered with ice.
We contemplated postponing the trip until the weather got cold enough to be taken seriously. 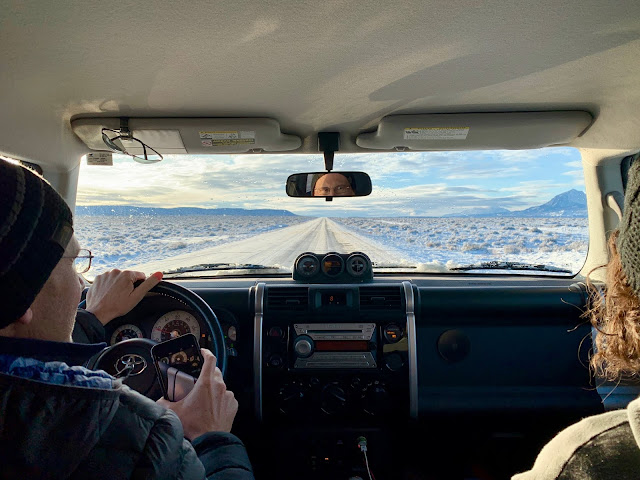 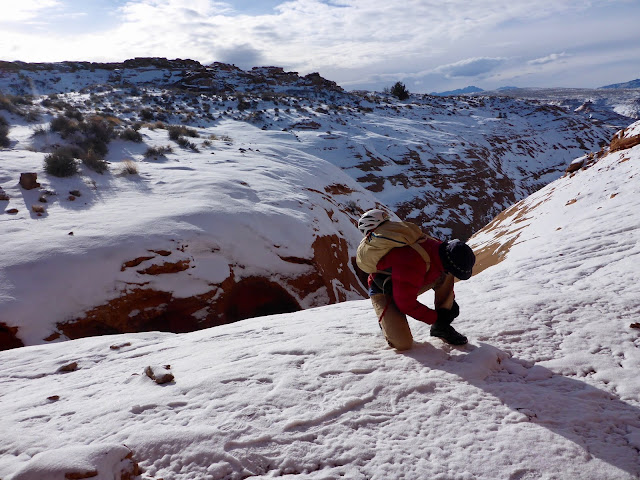 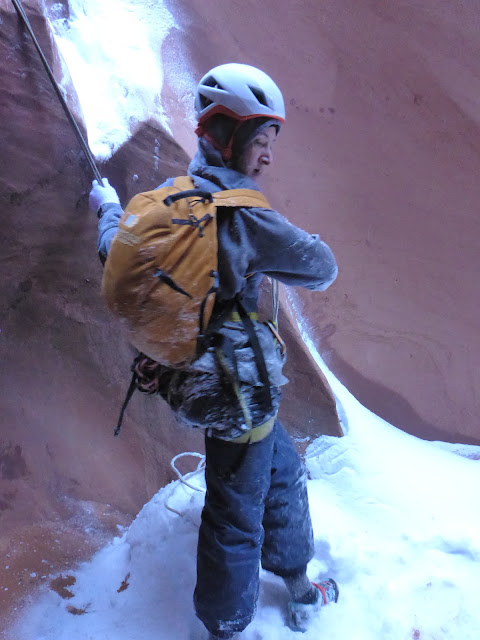 This is at the 12 foot rap/downclimb in Middle Leprechaun Canyon.
Gusts of wind funneled huge amounts of fresh snow down on top of us from the canyon rim above.
This gust dropped about 1/2 inch of snow in 30 seconds. 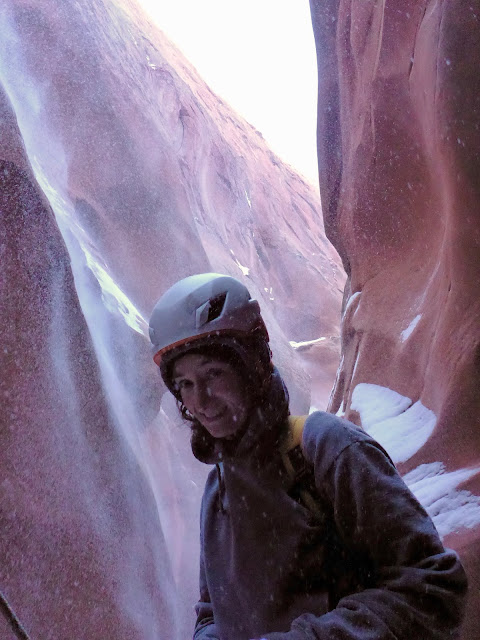 Luckily it was dry at the end of the canyon.
On this day going under the rockfall was easy, a first for me. 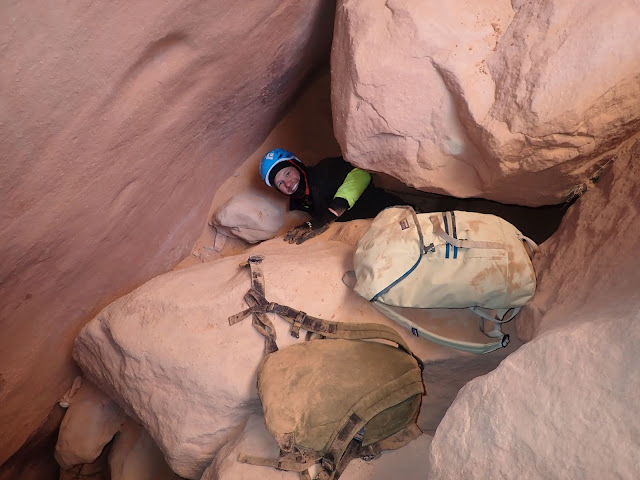 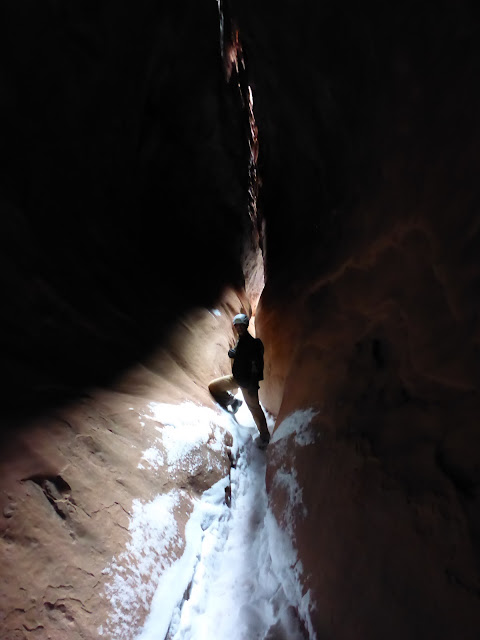 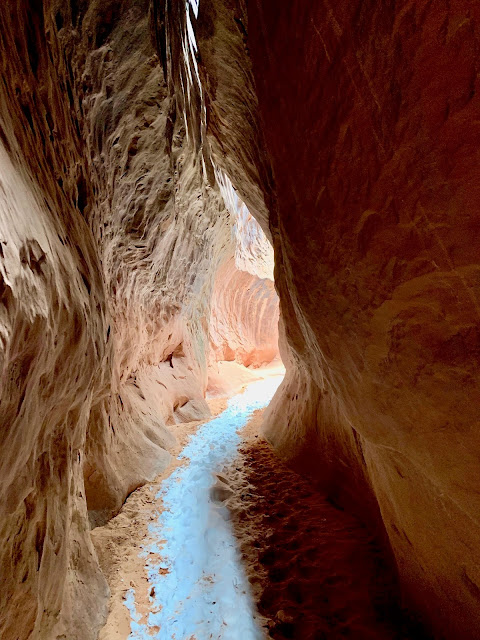 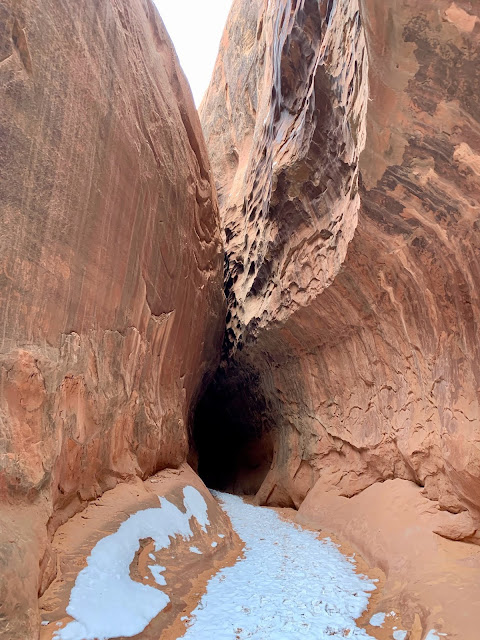 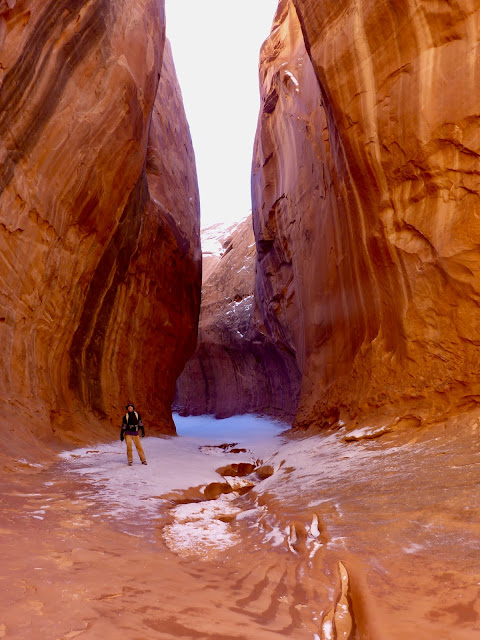 Three shots of the bridge in Hogwarts... heck, why not? 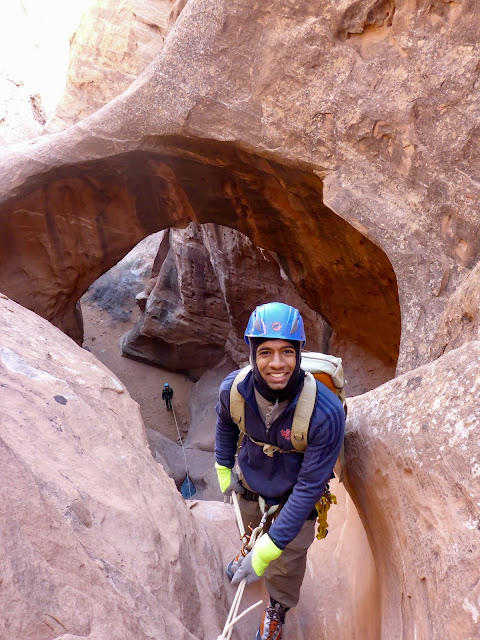 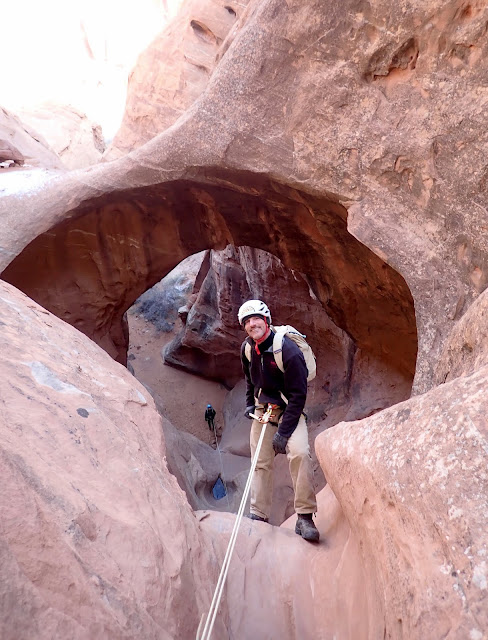 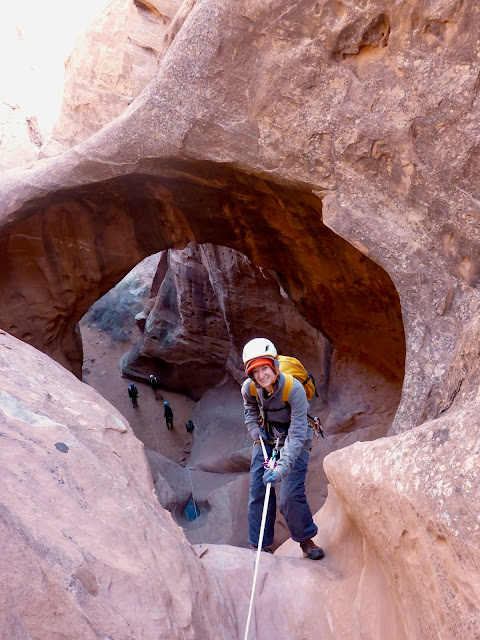 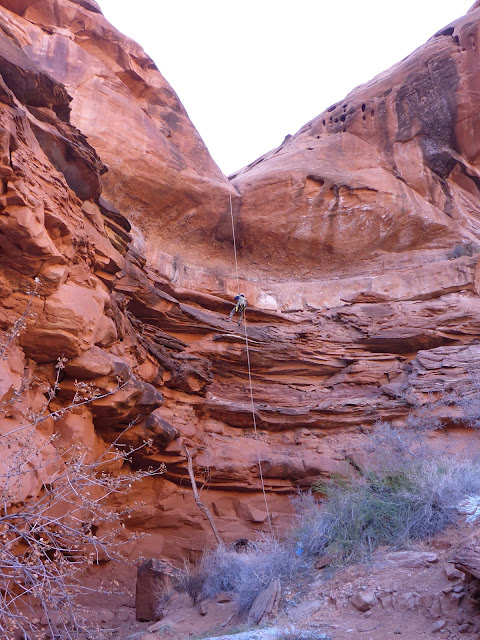 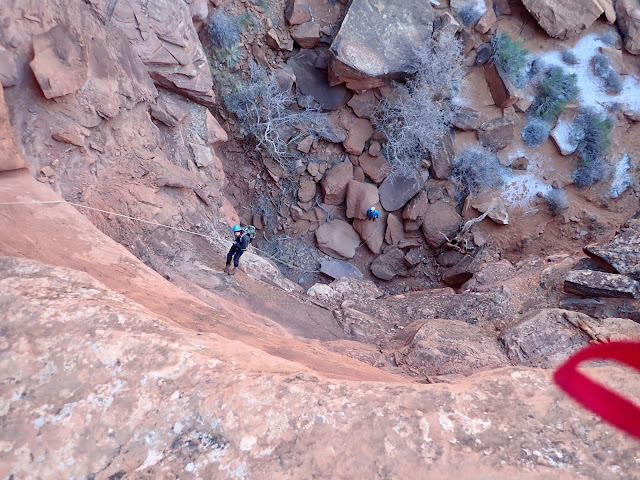 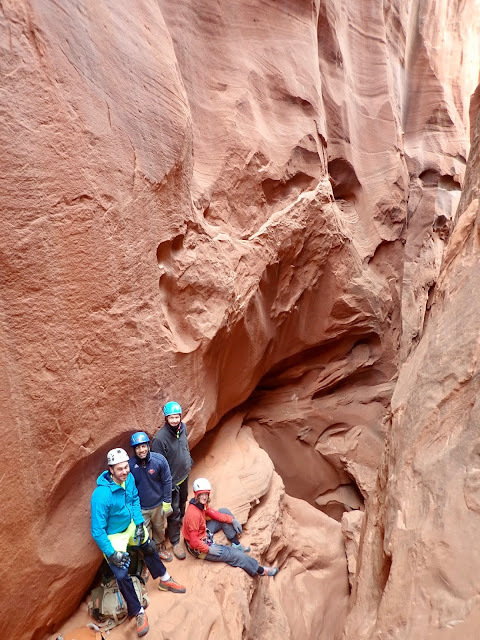 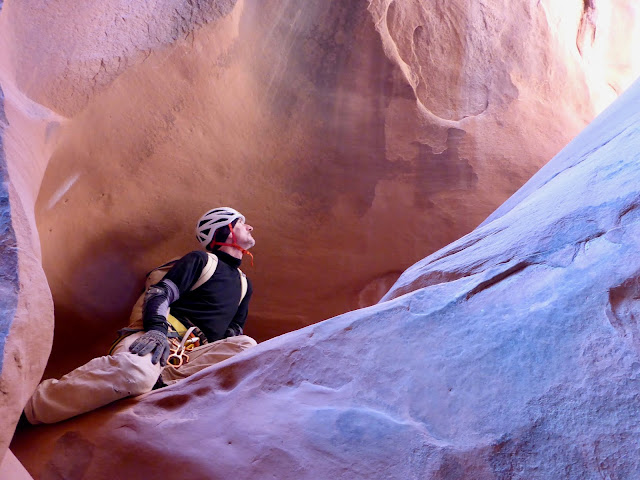 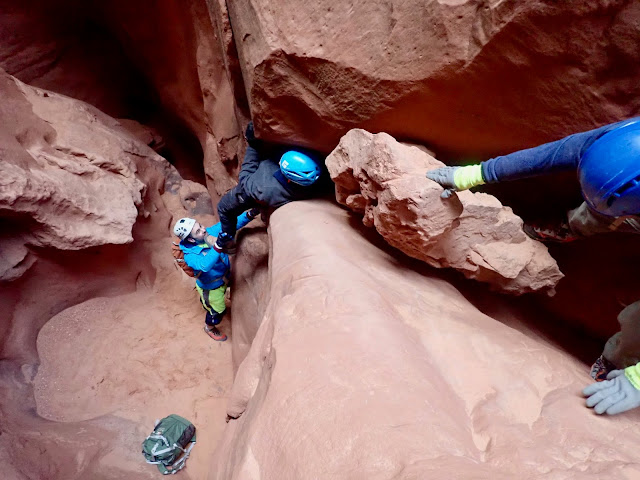 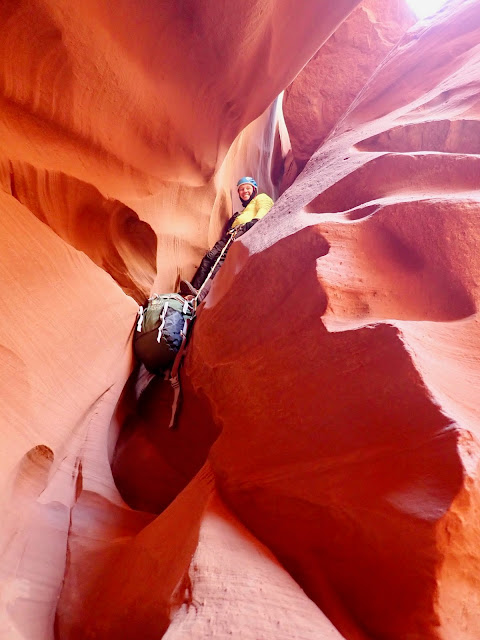 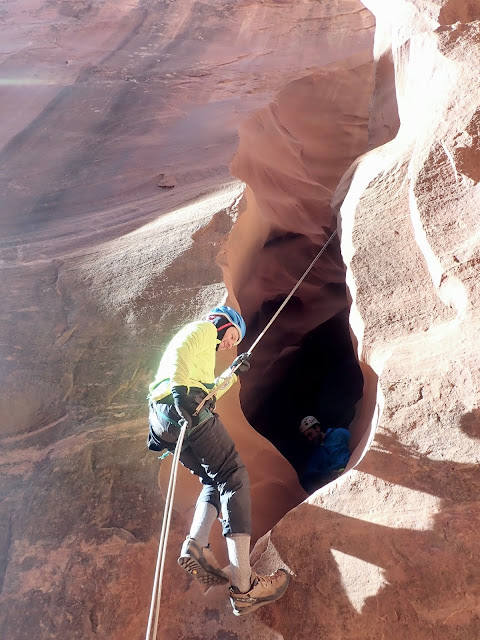 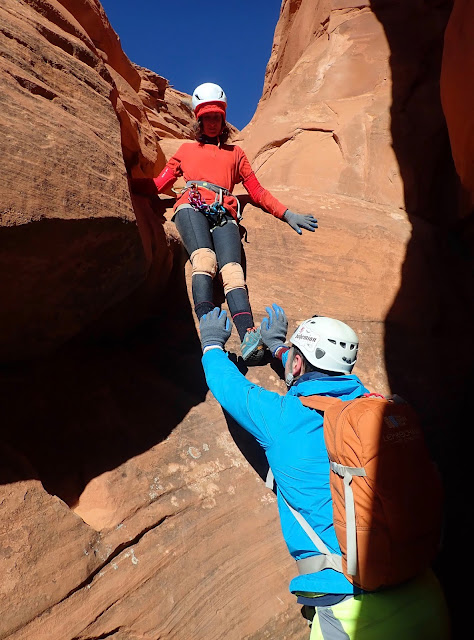 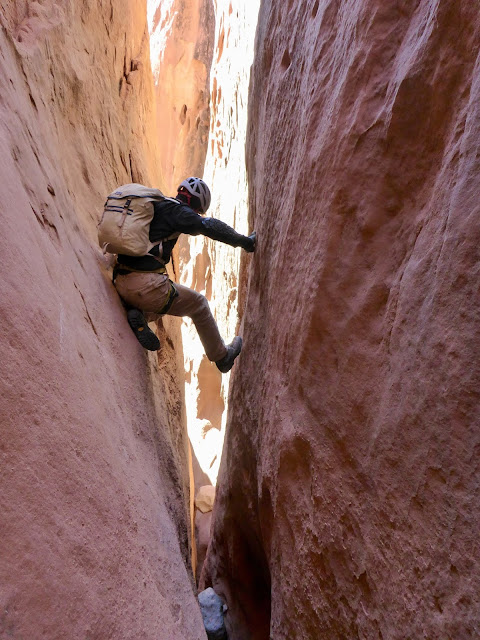 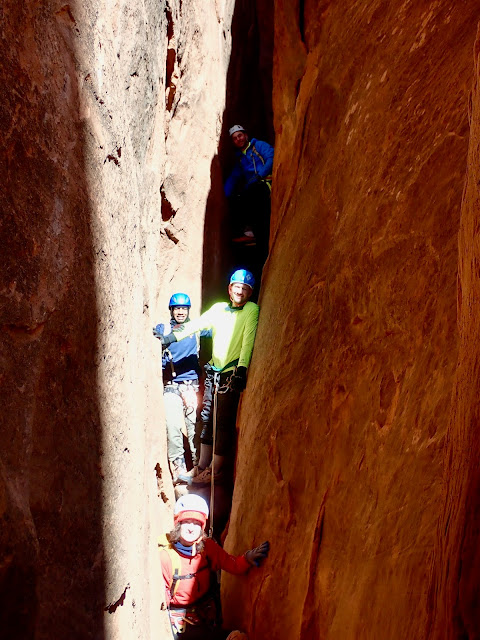 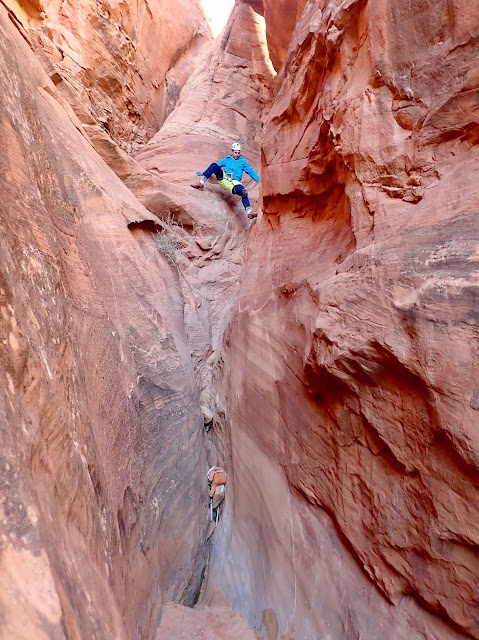 A nice stroll out of Hog Springs 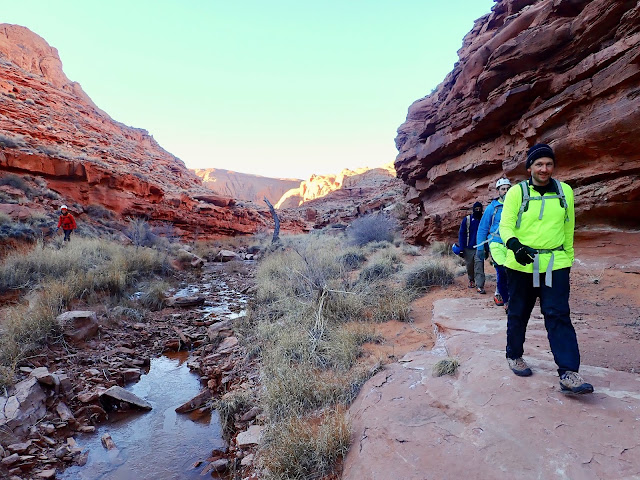 We seem to always run into Tom Jones in the North Wash.
It was fun to catch up with him. 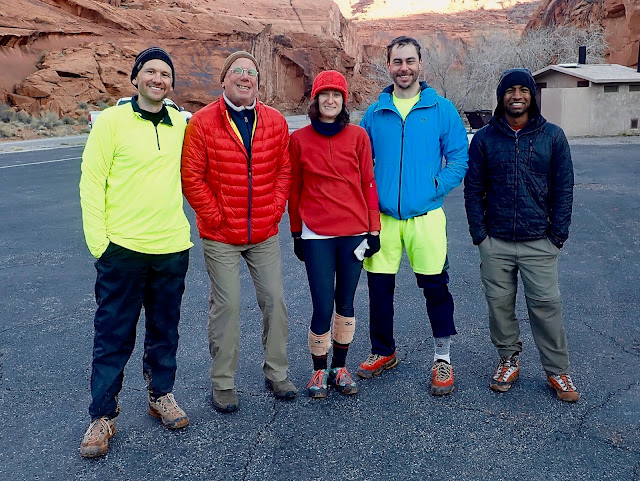 ... but having a great time anyway. 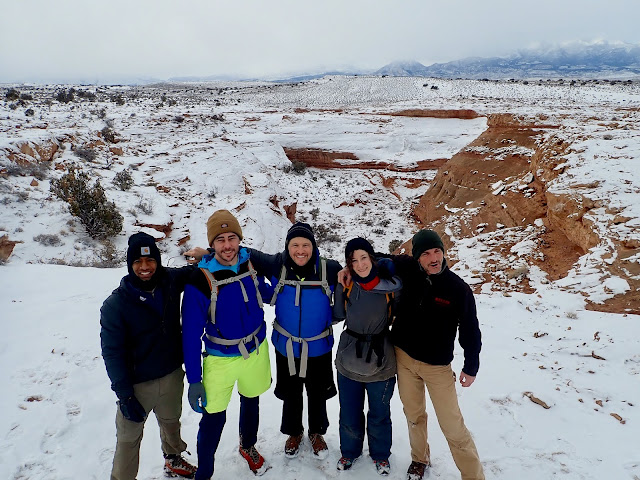 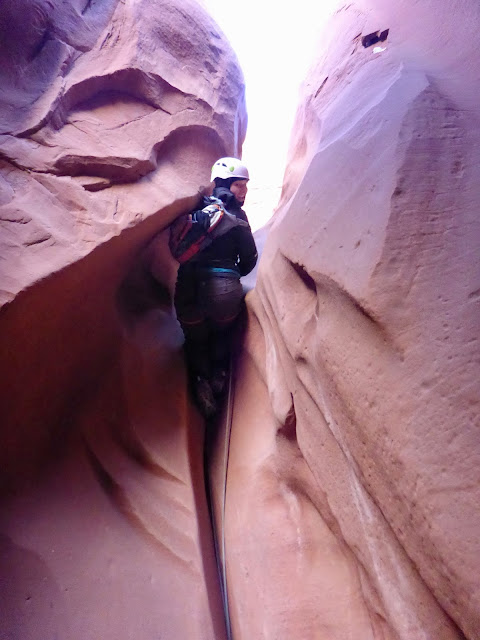 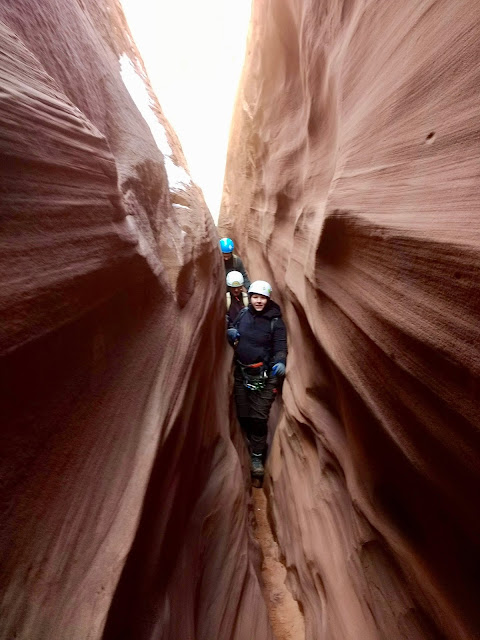 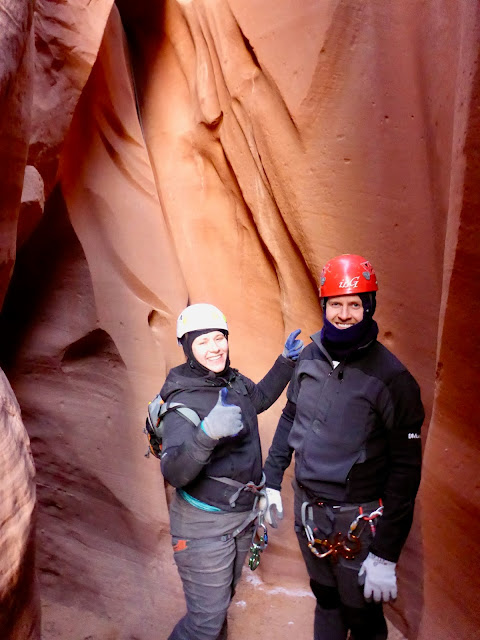