Steph and I hiked to the top of Elephant Butte on December 2nd, 2012. This is an excellent route for climbers that dabble in canyoneering; but not so much for canyoneers that dabble in climbing (me). I do realize that the two sports overlap a bit, and this route strongly reminded me to get back in the climbing gym. 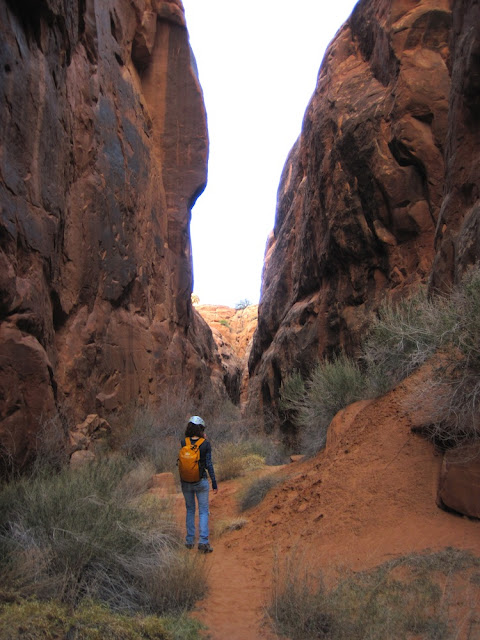 Not being much of a climber, I sometimes freeze up on unprotected climbs. I simply can't block out the exposure. Clip me in, and I'm fine. Is it a matter of practice? Or simply a matter of how I'm hard wired? Not sure, but exposure freaks me out.

The 5.4 climb on this route looks pretty easy, but if you fall, you will break some bones. The fall is 15 feet down to a steep sandstone bowl, then another 10 feet down to some broken boulders. Having a spotter there is pointless, it would just be a good way to get two people injured.

Steph can block out the exposure, and she is a better climber than me. So up she went... 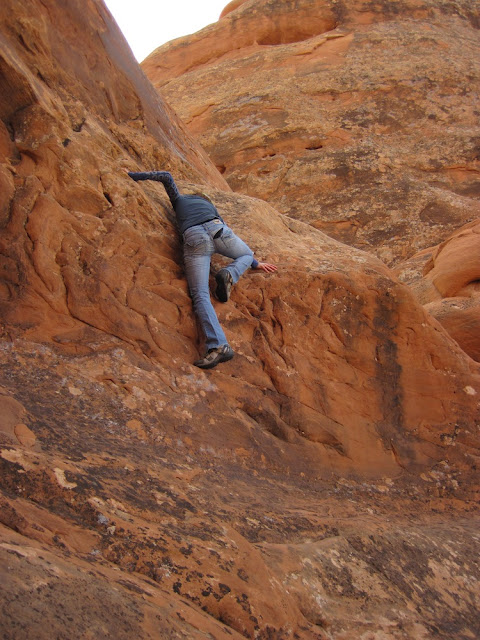 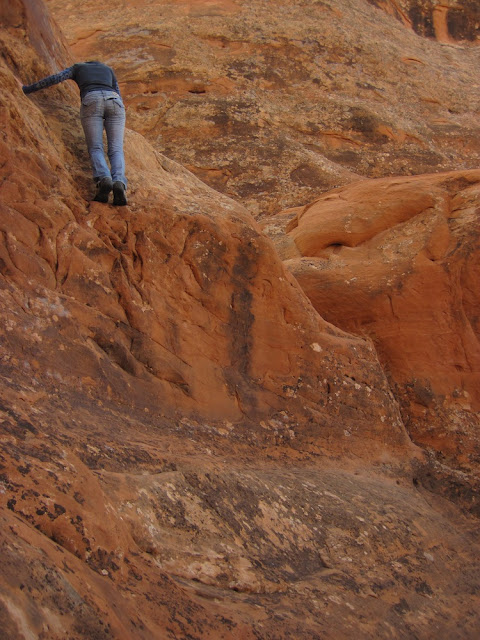 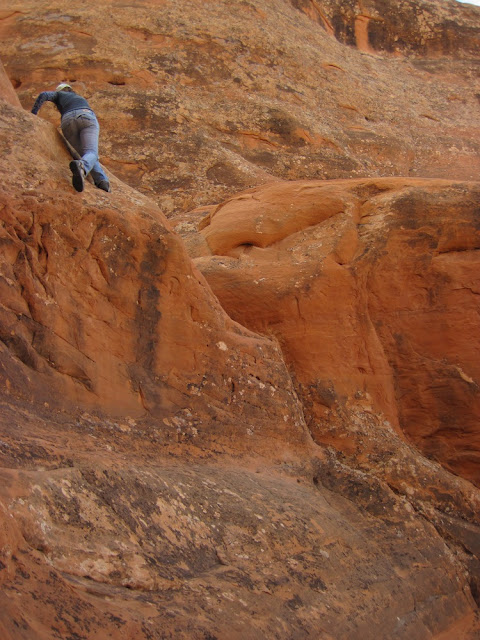 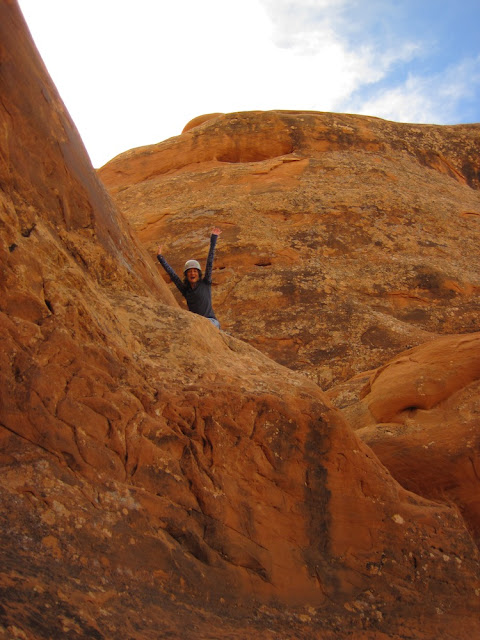 She handled the climb just fine, but it made me quite nervous. The penalty points for falling there are pretty severe. There are no holds to grab onto, one must simply balance on the holds the entire way up. Would it be outrageous to put a bolt somewhere on this climb to belay the climber and prevent a catastrophic fall? It seems prudent in this case, even though I'm generally against bolting.

We soon arrived at the first rappel. It is a 5 bolt anchor, of which 4 of the bolts were used. The outside bolts, #1 and #4, held most of the weight. The webbing placed apart at such an open angle puts a lot of stress on those bolts. Also, bolts #2 and #3 were rigged with acessory cord. And the whole damn thing was ugly. So I decided to rebuild it. 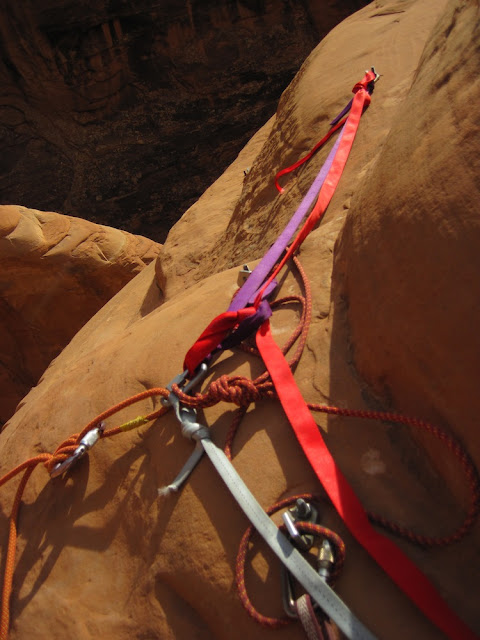 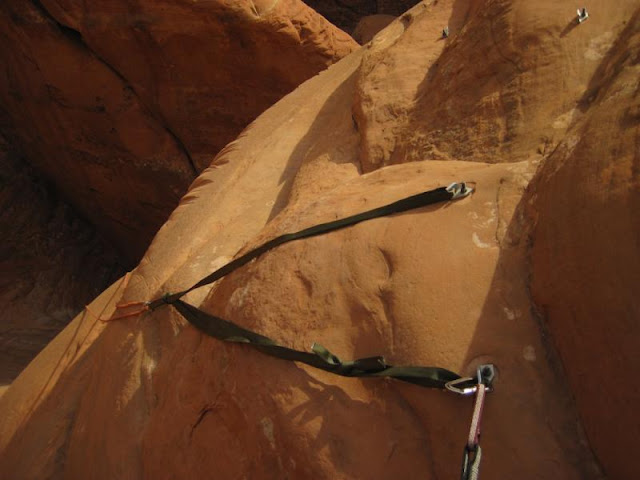 I did make one mistake here. I aimed the anchor parallel to the wall when it should have been pointed out away from the wall, toward the rope grooves. I also wonder if the person that placed all of those bolts intended for the anchor to be on bolts #4 and #5, and the other three to be used as protection on the way out.  It doesn't really matter though, your rope will grove from any of the 5 bolts. IMO, the bolts should have been placed high on the wall next to where the current bolts are located.

Anyway, the view from the top is excellent. The exit rappel is cool too (sorry, no photo). Elephant Butte was a great way to spend a day in Arches and we highly recommend it. 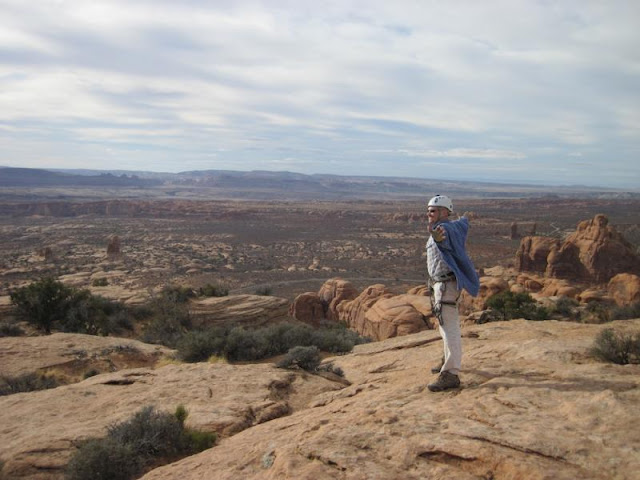 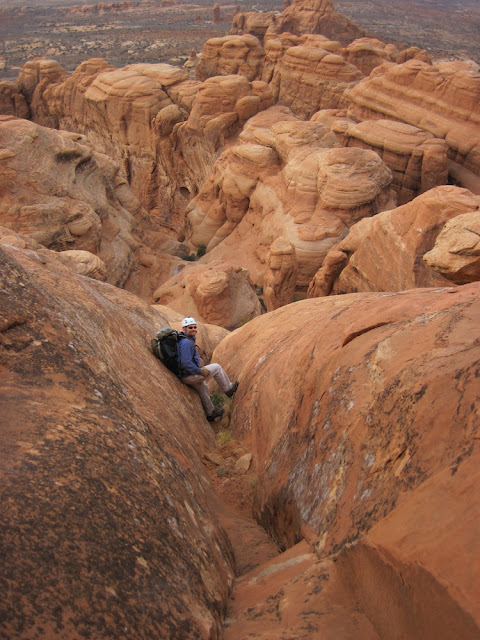