Doing Full Imlay in almost dry conditions is one of the hardest ways to do Imlay.

Before telling you about Imlay, I'd like to share a story about my experience at the Zion Backcountry Desk.

We arrived the day prior to our Imlay adventure and stood in line behind an unseasoned couple that was getting throttled by a belligerent park ranger wearing a too-tight park ranger shirt.  They were discussing a canyon that the couple had a reservation for.

Belligerent Park Ranger:  "... it would be CRAZY to do THAT canyon tomorrow!"

Nice Tourist Couple:  "Then which canyon should we do?"

Belligerent Park Ranger:  "I'm not sure ANY of them would be a good idea."

Belligerent Park Ranger:  "All of them, except Pine Creek.  I wouldn't recommend any of them."

Steph and I approach the desk.  Knowing what is about to happen, I lean confidently over the desk.

Bob:  "I have a reservation for tomorrow.  You can save the warning speech."

Belligerent Park Ranger:  "I WILL NOT SAVE THE SPEECH! *fuming* Which canyon do you have a reservation for?"

Belligerent Park Ranger, unhinged, buttons about to burst from his undersized shirt:  "YOU ARE AN IDIOT IF YOU WANT TO DO IMALY TOMORROW!!"

Steph looks at me, stunned, fearing the worst for the ranger.

Bob, without blinking:  "Let's save the idiot chatter and just issue my permit."

Belligerent Park Ranger, about to blow an aneurysm:  "DO YOU KNOW WHAT THE WEATHER IS GOING TO BE LIKE TOMORROW!?!"

Bob, still leaning forward:  "20% chance of rain with almost no accumulation, forecast as of 10 minutes ago."

Belligerent Park Ranger, steam erupting from his ears:  "FROM WHICH WEBSITE??"

Bob:  "Wunderground.  Now, let's stop with the back-and-forth.  May I please have my permit?"

The visibly furious park ranger finally stopped talking at that point, then issued my permit while continuously shaking his head.

The next day, we ran into other park rangers as we left The Narrows at 7PM.  They already knew who we were, because tales about the encounter had spread.  We did not even need to show them our permit.

I feel compelled to honor hyper-vigilant park ranger BW435, so I dedicate this trip report to you.
____

We left Lava Point at 5:30AM and began hiking with purpose.  We knew it was going to be a long day so there was no time to lose.  We didn't get any photos of the top half, because we were moving quickly trying to stay out of the sun.  The ropework on the big wall sequence was a hoot, and somewhat new to me.  The upper half contained just enough water to keep us cool.  Steph put on her wetsuit, but soon regretted that decision. 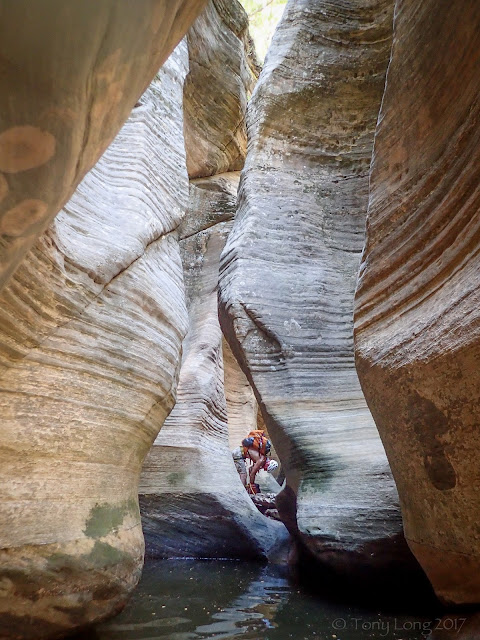 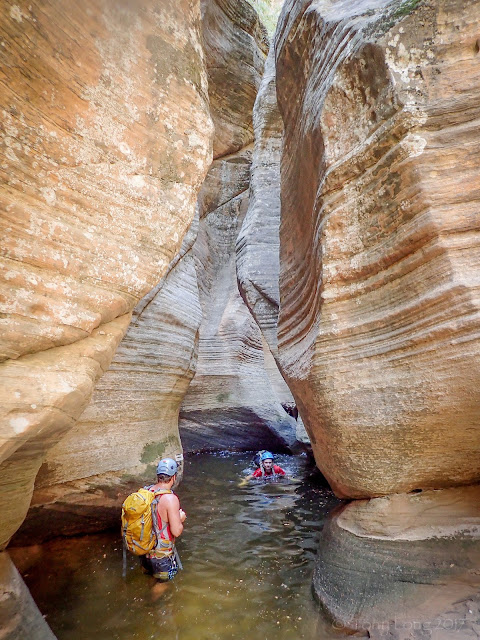 The top half was longer than we expected.  It took us seven hours to reach the Crossroads.  The temperature was easily over 100 degrees.

We took a very short break then put on our wetsuits.  We got to the log soup, which was so dry that it had become a log pit.  Getting down into the log pit required a rappel.  Getting out required a tenuous upclimb.  It was shocking to see the difference in water level compared to 2016. 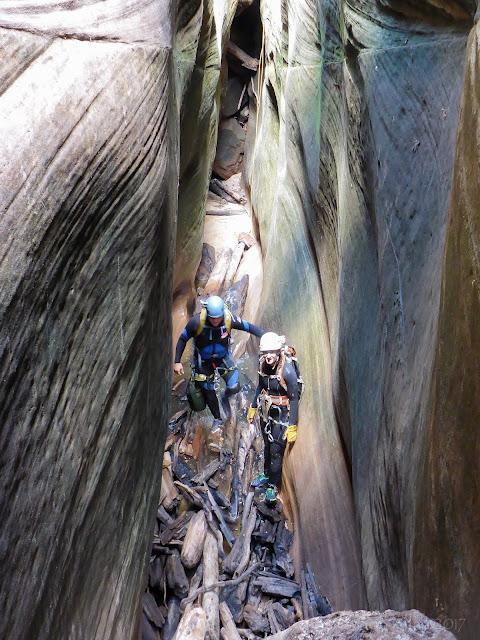 We were all sweating profusely at this point.  Dry room after dry room.  Just as we arrived at the heart of the canyon we heard:

From directly overhead came the loudest thunder clap any of us had ever heard.  All of us jumped from the sound.  It was impossible to suppress the fear.

Imlay is a HUGE canyon with a small catchment.  Dozens of large rooms have to fill with water and millions of pounds of dry sand must be saturated before the canyon could possibly start to flow.  We are talking about hours of rain, directly into the Imlay drainage, before it would be primed to flash.

Then it began to rain.  My brain said 'no danger' but my heart said 'RUN!!'.  Everyone was visibly scared.  I did my best to appear calm and explain the reality of the situation.

I've been in a canyon when it is REALLY raining.  This was not that.  It rained for about 20 minutes then stopped.  The thunder rolled a couple of times.  Just enough to make it exciting.

The mostly-empty potholes were PHYSICAL, but fun.  We were all pretty whipped when we got to The Narrows. 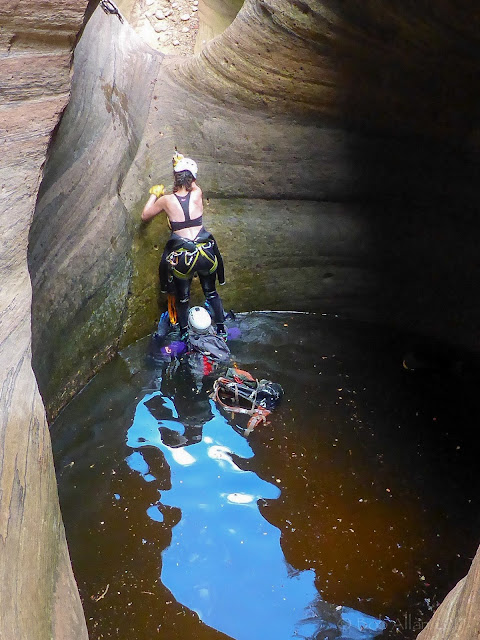 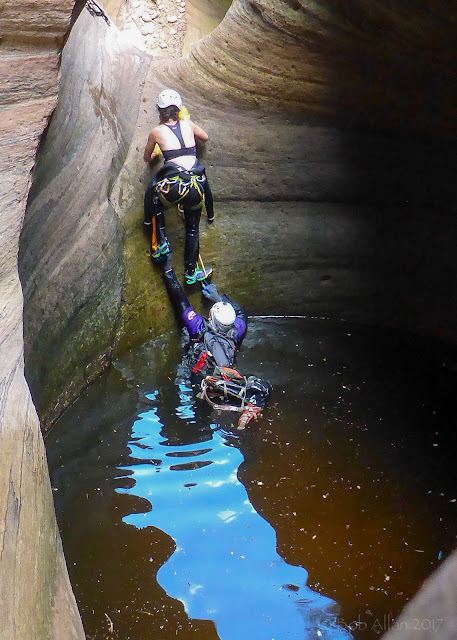 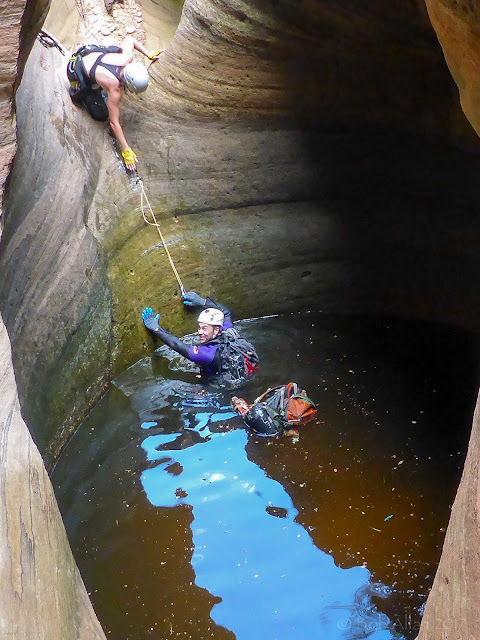 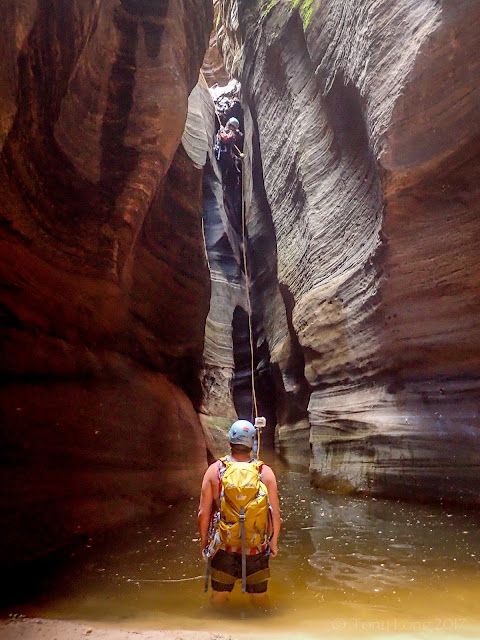 Three of us removed our wetsuits after sweating in them for about 3 hours.  I wish that I'd never put mine on in the first place.  There were only about 3 or 4 cold potholes, and they were welcome in the summer heat.

Overall, we took 14 hours car-to-shuttle.  It was an excellent adventure with friends new and old.
Posted by Bob Allan at 9:00 AM