“Have you ever had to bivy?” asked Byron.

“Luckily, we never have,” I replied.

“Me neither,” Byron said.

I selected the Big East Fork of Sevenmile Creek because I wanted to introduce Tony’s daughter, Hanna, to canyoneering in a fun and memorable way.  The goal was to go car-to-car in about five hours.  Our group was Tony, his daughters Hanna (8 years old) and Makena (11), Byron, Steph, our son John (6), and myself.

We started the day with a hearty breakfast then made our way out onto Ticaboo mesa.  The road was in terrible shape, so it was slow going.  We started hiking at 11 a.m.  Not ideal, but not a concern.

Photos by Tony, Byron and myself. 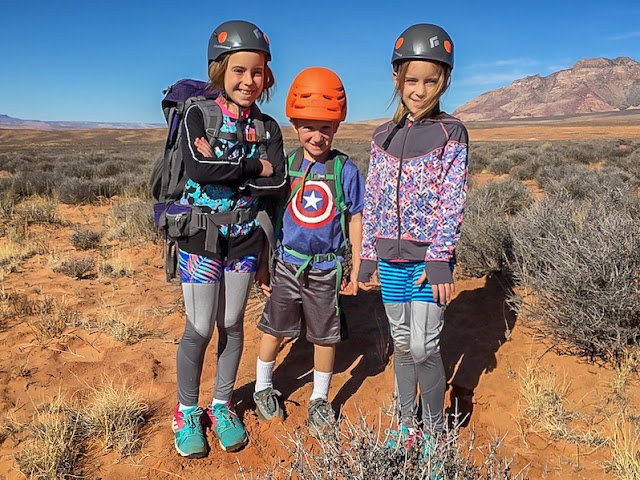 We arrived at the top of the slot and stowed the GPS.  The beta described four raps with the tallest being 70 feet.  We opted to lower the kids rather than let them rap, a strategy that propelled us down the slot at a rapid pace.

Our primary focus was on the safety of the children in our group.  We knocked off a 30 foot rap then a 50 foot rap in rapid succession which prepared everyone mentally for the 70-footer ahead.  Time and distance passed without a thought. 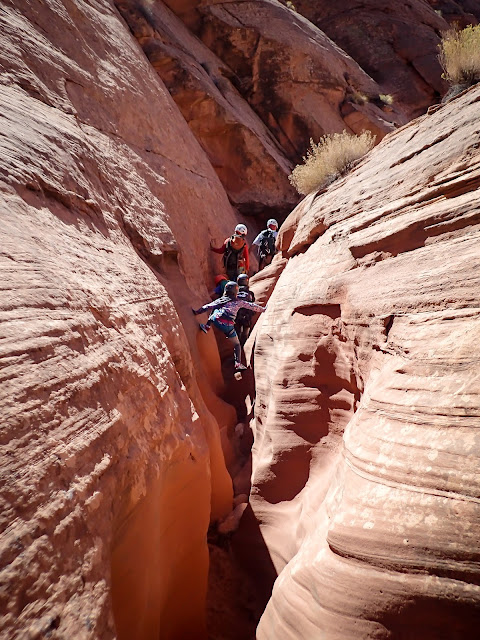 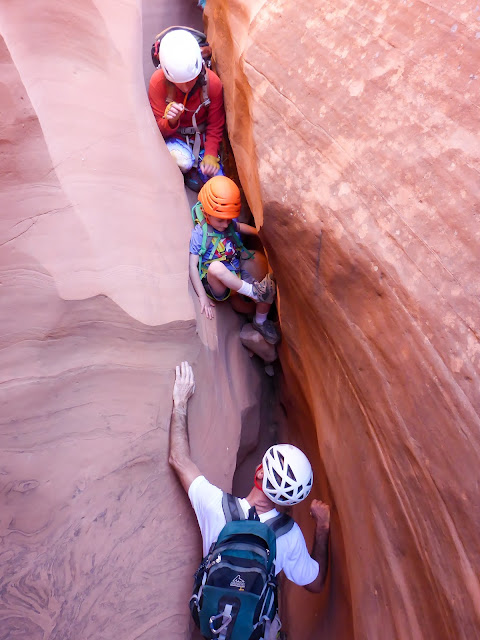 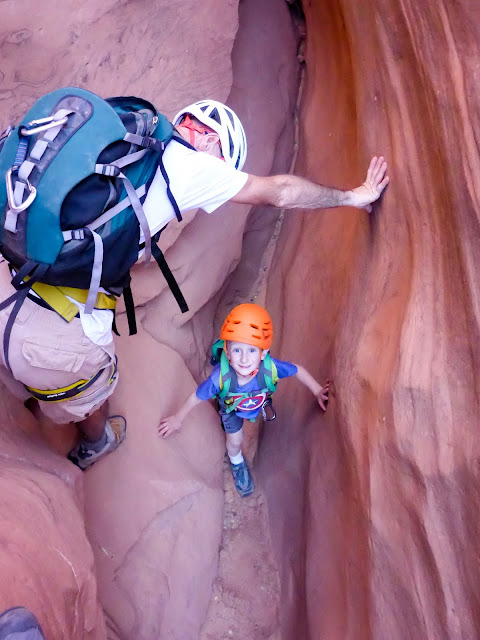 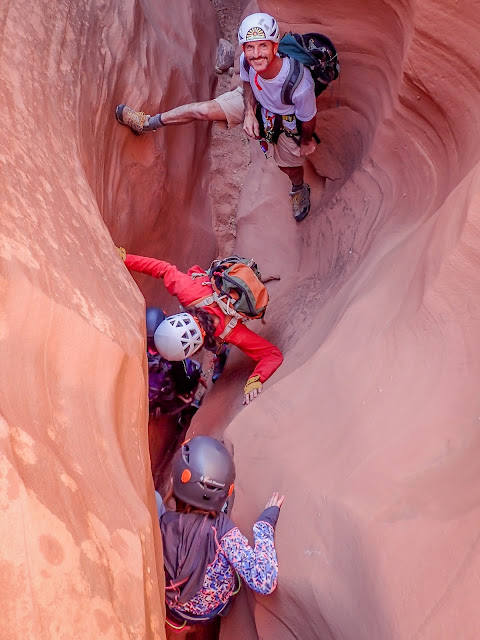 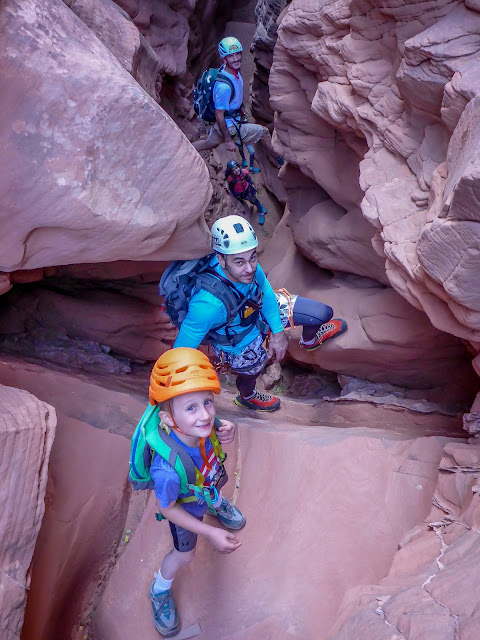 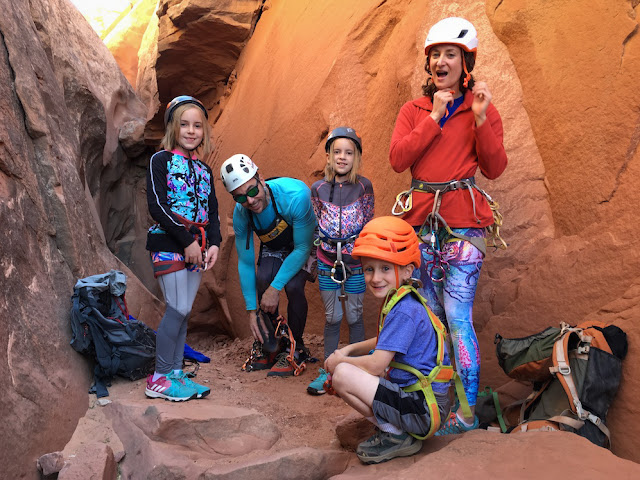 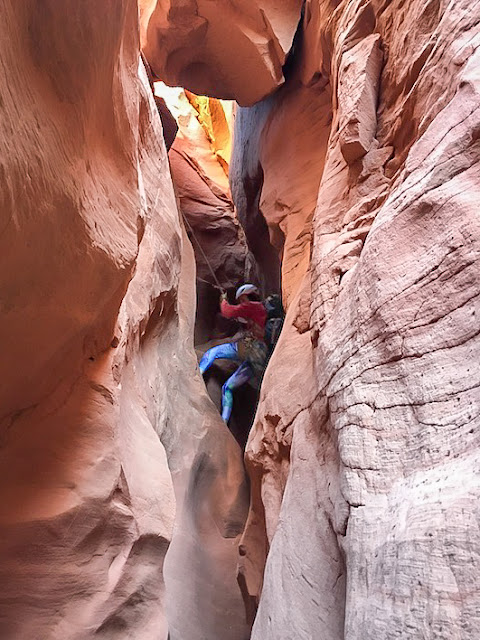 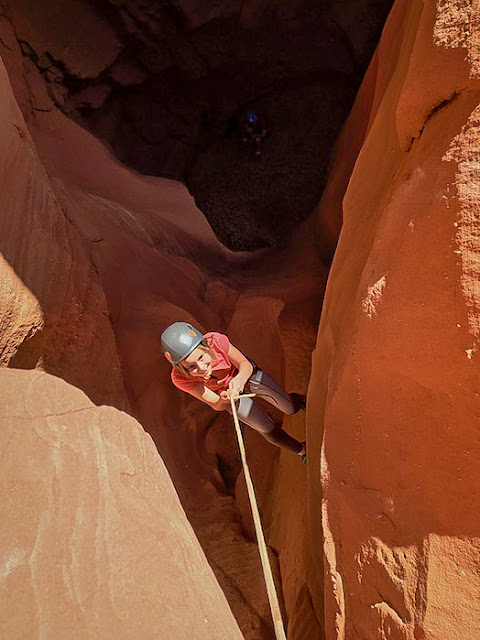 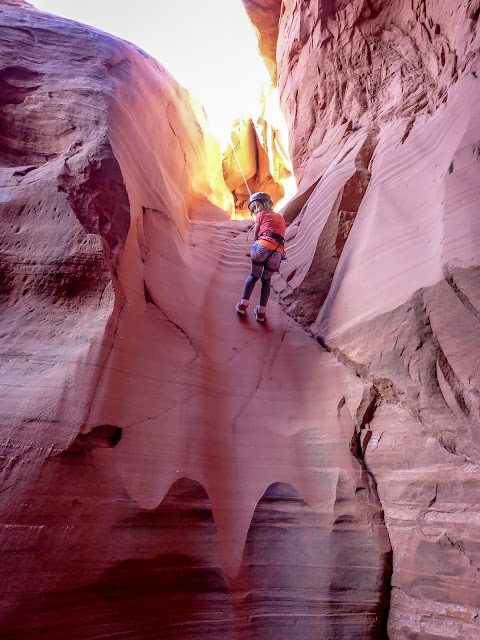 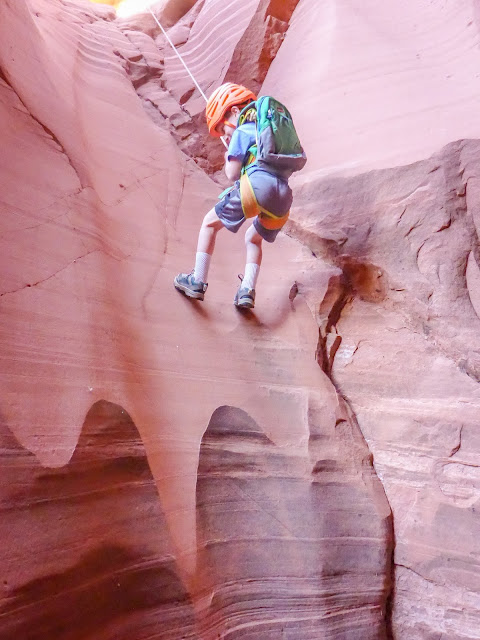 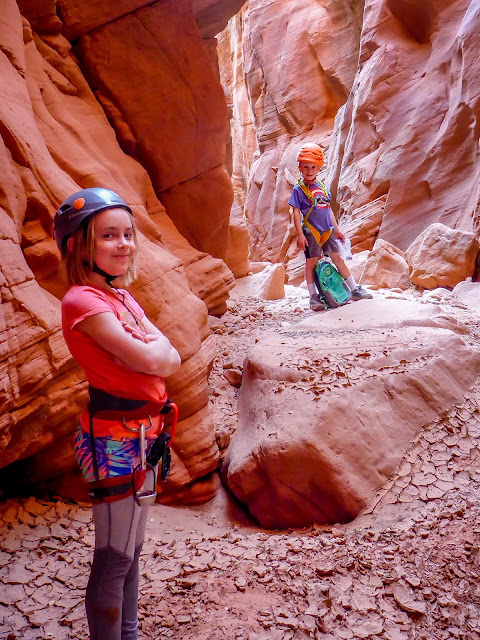 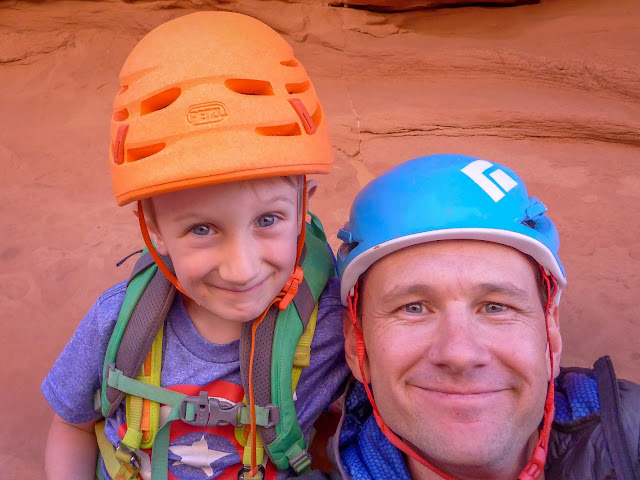 Down, down, down, we went.  Through a tight rabbit hole, then down a tall crack around a protruding flake.  Physical and fun.  The scenery improved around every corner, drawing us in.  The 70-footer never arrived. 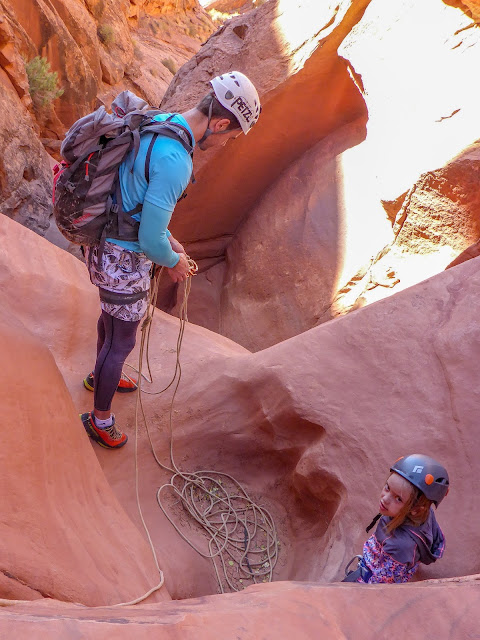 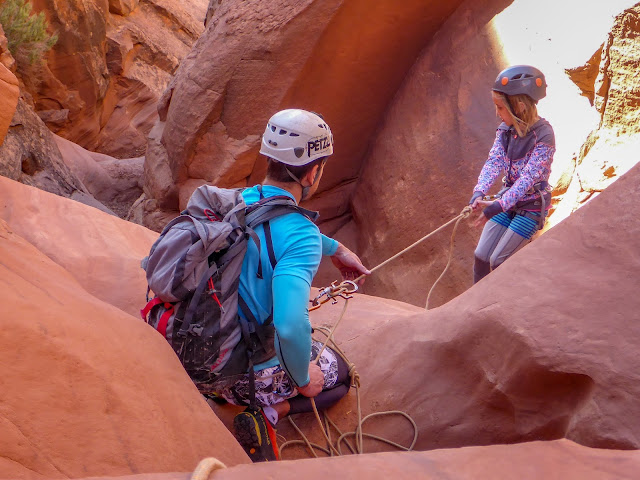 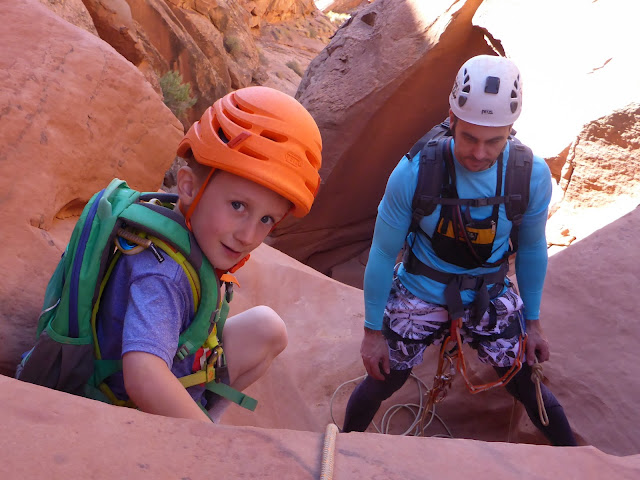 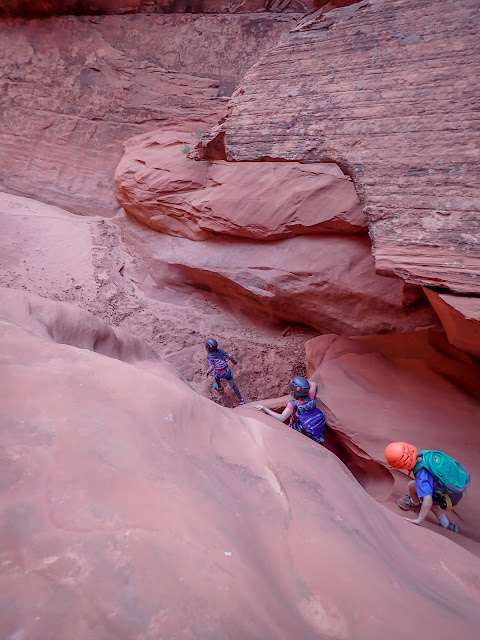 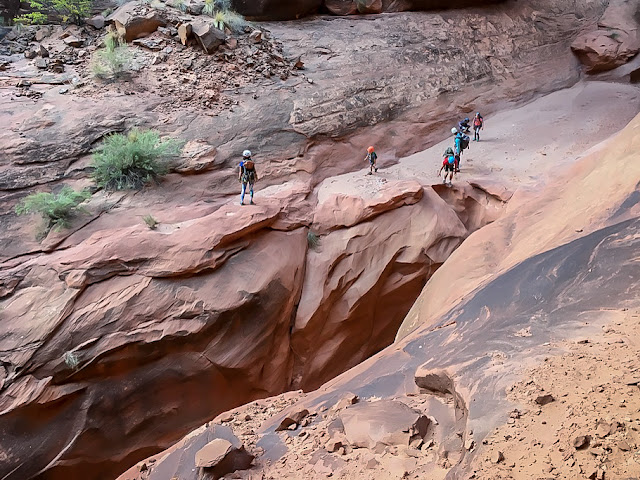 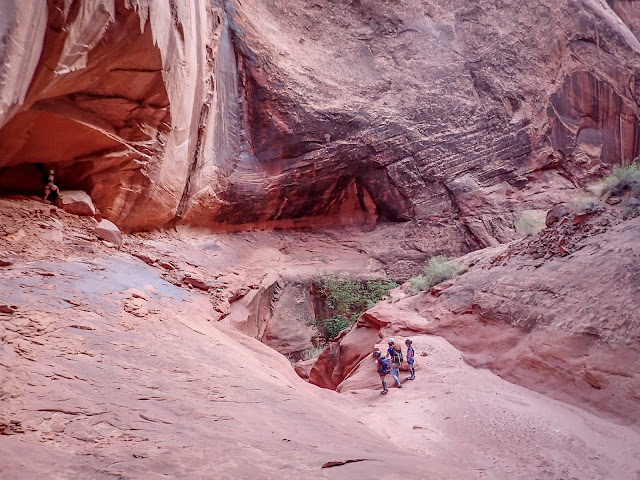 After a while, we arrived at an obvious trail which was quite unexpected.  It started from downcanyon, so it had to be from boaters hiking up from Lake Powell.  We continued and the trail became more pronounced.  We passed an obvious slot coming in from the west. 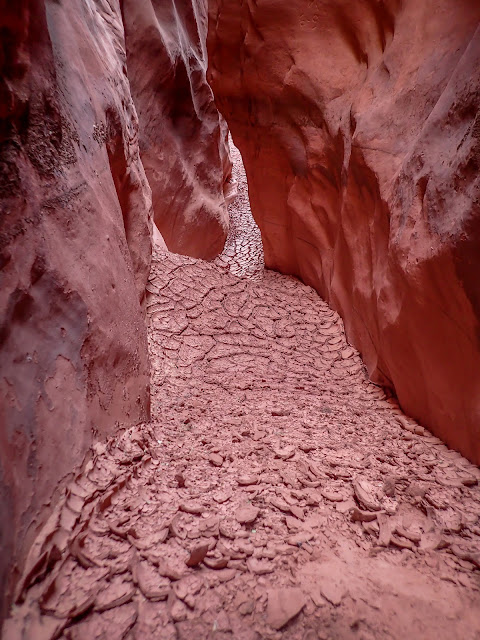 We took a break and drank some water.  We were all smiles.  I got out the GPS to check our location.  The GPS showed that we were nearly on the edge of Lake Powell.  It was 4:30.  We had been hiking for five and a half hours?? Impossible!!

I felt sick as reality sunk in.  We were 1.4 miles downcanyon from the exit ramp.  The canyon to the west was Double Duce.  There were many upclimbs between us and the exit.  Challenging climbs for the adults.  Impossible climbs for the kids.

I broke the news to the group and braced myself.  It was totally my mistake.  Everyone was stressed for a few minutes, then focused on the task at hand.  We had to race the sun to the exit ramp or sleep in the canyon.

Back up the canyon we went.  We each had our guesses as to where the exit was, all in about the same area.  Up, up, up, we climbed, sweating profusely.  We pulled, shoved, and towed the children to the top of each obstacle.  The kids were climbing hard as well, knowing what was at stake.

It began to get dark.  We arrived at the area where we guessed the exit would probably be.  Nope.  Only half way to the actual exit.  We got our headlamps out.  We were running very low on water.  We got to the rabbit-hole upclimb.  Tony did not fit, so he climbed up and around.  Not an easy move.

Night fell.  We arrived at two stacked boulders that looked daunting, flat on the face and nearly 30 feet tall.  The protruding flake at the top loomed over us.  We made quick work of the flake, hauling the kids to the top on rope.  Sweat was pouring at that point.

1000 feet to the exit, we counted it off.  When we arrived at the ramp, we all were surprised… not one of us guessed that spot!  Not one of us had even glanced at it earlier in the day!  The ramp had many loose rocks which were difficult to climb in the dark without injuring one another.  We were all running on fumes.

The moonlight illuminated our way back up the sandstone domes.  There was no wind, the sky was clear, and it was fairly warm.  We were very lucky.  We hiked for what seemed like hours.  The kids were totally maxed out.  Tony carried Hanna part of the way.  I was certain that I’d ruined the sport for her. 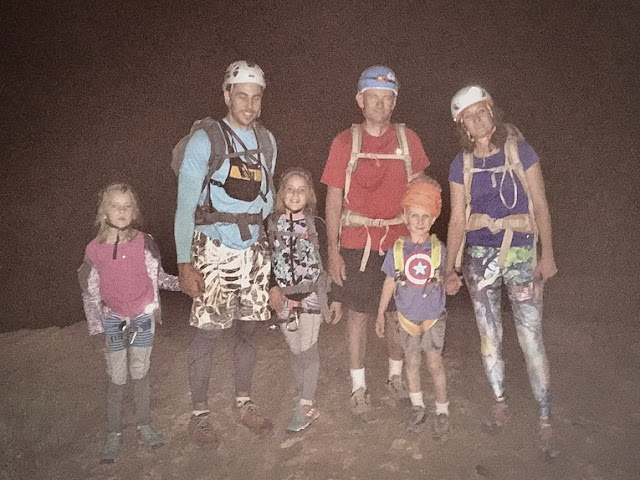 After 10 hours of hiking, we arrived safely back at the cars.  I ate three bananas, drank about a gallon of water, drove us back to camp, then went straight to sleep.
_______

The next day I expected everyone to be angry.  We had another hearty breakfast, lit a morale-boosting fire, then shook off the aches and pains.  After a few chocolate pancakes we all seemed to feel pretty good about the previous day’s adventure.  A few hours after the pancakes we found ourselves charging gleefully down Middle Lep.

I’m grateful to do canyons with people that can do hard things, and I’m lucky as hell that they are forgiving.