Shenanigans has the reputation of being a frightening canyon. As a team we did our best to prepare for it and it still scared the hell out of us. Steph, Tyler, Aralynn and I took on the challenge September 15th, 2012.

So, we did Middle Leprechaun together. I've done Chambers Canyon. I'm 5'9", 173 lbs. Shenany should be no big deal. Right? 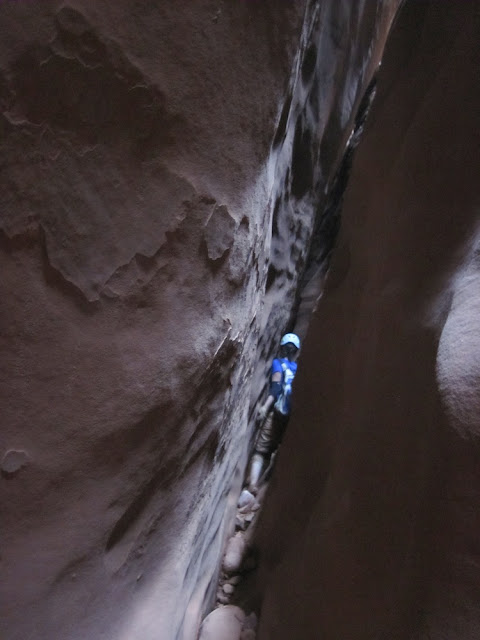 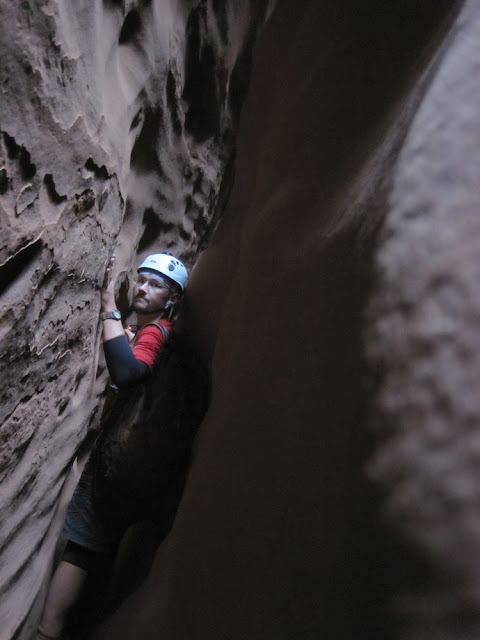 Shenanigans Canyon starts out very tame; it's typical North Wash fare for some distance. It's very pretty. It builds your confidence as you descend. Then you arrive at a slanted hallway. Part of that hallway is pitch black and it is also looks tapered at the bottom. It looks as if the smallest person would certainly become wedged between the walls if they proceeded at ground level.

Steph wanted to lead the hard sections since she doesn't like to be stuck between people in a canyon. Claustrophobia is her canyoneering Achilles' heel. We tentatively entered the slanted hallway. Soon the walls closed in, heightening Stephanie's fears. She is tough, and rarely cries, but the feeling of entrapment was overwhelming and she couldn't continue. She wept and pleaded to go back the way we came. We rested for a bit and tried to calm her nerves. We decided that I should climb over the top of her and lead. In a canyon that narrow, it's easier said than done.

I chimney climbed up to a log jammed above Stephanie's head. I then inspected the remainder of the hallway from my perch with a flashlight to make sure we weren't heading into a trap (yeah, the beta says it isn't a trap, but your eyes will tell you otherwise when you are there). Once we could see the rest of the hallway, Steph decided to continue leading. I descended back to my spot behind Stephanie and we finished that section unscathed.


Steph and I negotiating a tight section before the slanted hallway. 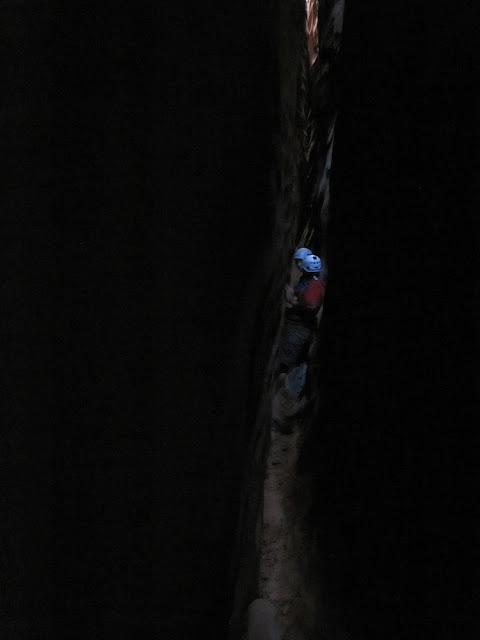 Soon we arrived at the Grim Crawl. It's gorgeous! It is also a formidable obstacle. We found a pretty good deadman anchor laying near the edge. It had been washed up form a recent flash flood. It was a single stone the size of a cantaloupe expertly wrapped in webbing. We cleaned it off, adjusted the webbing and tried to find a good place to bury it. It was difficult because there is a large hump in front of the drop which forces the deadman up and out of the ground when you weight the rope.

Anyway, we dug up as many stones as we could find and placed them on top of the deadman and buried it deep in the sand. 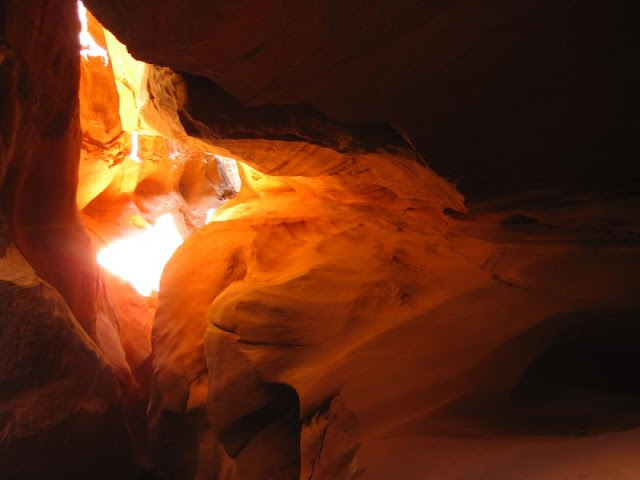 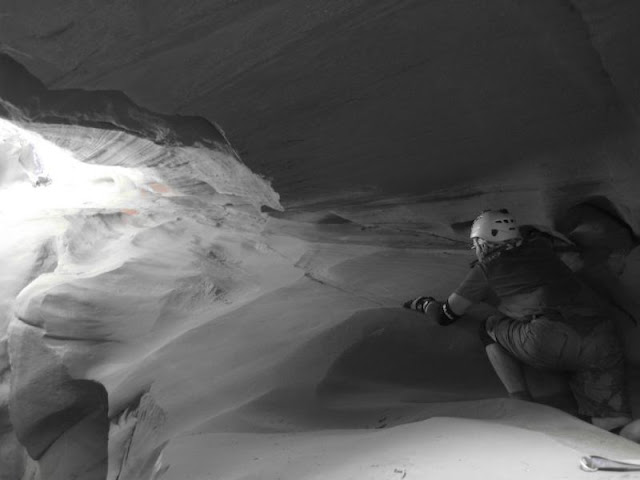 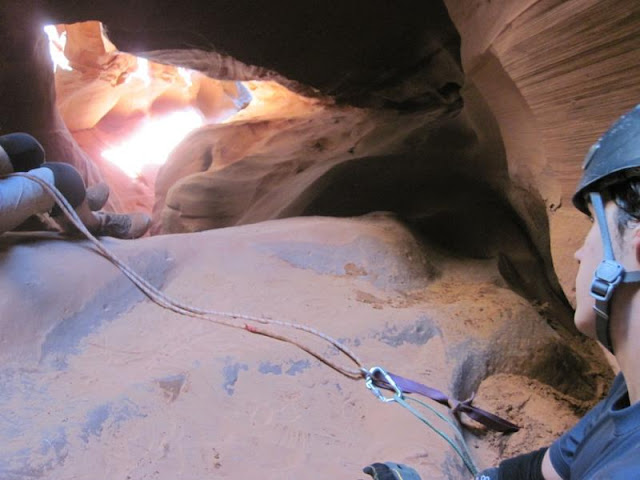 We discussed our options. I laid down on the Grim Crawl. Yeah, no thanks. My anchor building skills are better than my belly-crawling-along-sloped-shelf skills. I pointed to a large chokestone next to the ledge of the Grim Craw and said "I believe that the downclimb from that ledge is pretty easy, once you get across the Grim Crawl." Tyler agreed that the downclimb looked easy from the top. It appeared to be a solid plan B. Rappelling off of the deadman was plan A.

To be clear, I wasn't setting Tyler up for an epic. He can handle himself. Tyler's bag of climbing tricks is pretty deep. He can climb 5.12 and boulder V7 routes. We both agreed that the Grim Crawl and the following chimney downclimb was no big deal –for him.

Well, it came time to get some people down. Steph tested the deadman first (backed up with meat). It moved enough to crack the mountain of sand on top of it, but not enough to worry about.

I then proceeded to rappel off the deadman with Tyler backing it up. I rapped fast and stopped hard to test it. I hit the anchor as hard as I could. It didn't budge. Sweet! For our needs, it was bomber!

So, instead of rappelling, Aralynn headed for the Grim Crawl. She is very small, less than 100 lbs. She thought the Grim Crawl was easy, and sped across it without hesitation. Once on the far shelf, she thought she was home free. Tyler also committed to the Crawl and tossed the rope down to me and Steph. He was a little spooked as he made the moves, but also made it across quickly.

From the bottom, the chimney downclimb looked like about 40 feet. From the top, to someone who has never descended a tall chimney (Aralynn), I'm sure it seemed much higher.

Tyler descended the chimney first. He only went down about 10 feet and coaxed Aralynn off the edge. She made the committing move that pins your body between the walls of the slot. She looked down at Tyler and then all the way to the bottom. Panic set in. That was a bad spot to have uncontrollable, adrenaline-fueled crying, but there is little one can do about that kind of fear. If she fell she probably would have died, and she knew it.

With some great coaching from Tyler, she did arrive safely at the bottom. It took about 45 minutes and many tears were shed. We all learned some important lessons from the Grim Crawl.

We headed down canyon through a fantastic twisty slot and underneath a very small arch. Then we arrived at a very long, well-lit, ultra-tight hallway. I was in the lead. Many parts of this section clamped down on my chest as I headed through. I never got stuck and my confidence continued to build as we flew through 200 feet of nightmarishly narrow slot canyon.

That all came to an end in a big hurry. Suddenly I couldn't get through. I tried again. No way. I extended my arms upward and breathed out hard. No again. I looked up, maybe to chimney up and over... not an option. I looked down... yes, it was perhaps two inches wider. I laid down on my side and started to scoot along using the side of my arm against the floor of the canyon. I couldn't see where I was going because there wasn't enough room for my head to tilt backwards with my helmet on. I used my free hand to remove my helmet and tossed it downcanyon. The bottom of the canyon narrowed slightly as I scooted along. Soon, I became stuck in that position. It was horrifying. I began to panic.

Steph was cheering me on the whole way, confident that I could make it. When I became stuck she stood next to the soles of my feet and let me use her ankle/leg as a springboard to propel myself along the canyon floor (really, really scary). I scooted another 10 feet until I could see the canyon widen above me, maybe an inch. However, I was still stuck laying on my side; there was simply not enough space to bend the arm underneath me to push myself into an upright position. Steph extended her hand down and pulled me to an upright position.

I then stuck my open hand across the width of the canyon. My hand is 9 3/4 inches from thumb to pinky. I've been in several canyons that skinny, but that section of Shenany takes the cake. I curled my pinky finger inward and could still touch both sides of the canyon!! It was almost like touching a hot stove, I pulled my hand back in horror- in pure disbelief. I knew I wouldn't fit. It was that width by my feet as well.

Exhausted, I looked at my options. It would have been be hell to go back. I looked up and noticed that the canyon widened very slightly above me. Going up and over the next 20 feet of canyon was my only option. I chimney climbed up two feet, which was no easy task in a canyon 10 inches wide. I ran out of strength and had to come back to the ground. Panic began to swell in my chest.

Fear of the unknown is bad. Fear of the known is even worse. I knew what kind of obstacle we were dealing with and knew I couldn't get out. I tried again. As I climbed Stephanie had the great idea of pushing on the sole of my upcanyon foot. This technique proved to be very helpful. Without her assistance I wouldn't have made it up and over the 8 inch wide slot.

They all made it through behind me then the canyon opened up and and we rested for a moment. The feeling of relief was overwhelming. A tidal wave of raw unexpected emotion hit me. I began to hyperventilate. I began to sob. Shenanigans had also broken me down emotionally and there was nothing I could do about it... We had a couple of quiet minutes and moved forward.

The exit sequence was great; somewhat poetic after such a harrowing canyon. We all downclimbed the first 50 feet, and rappelled the last 50. We zipped lined our packs across the water then carefully negotiated the ledge of the pool without falling in.

A great view of the final downclimb and rappel. The pool is visible 100 feet below. 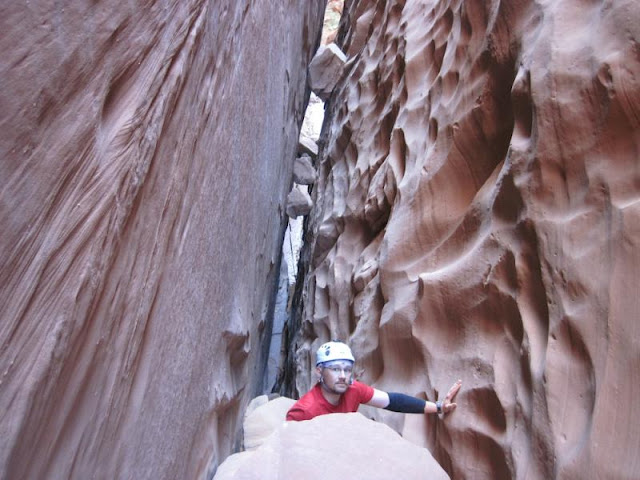 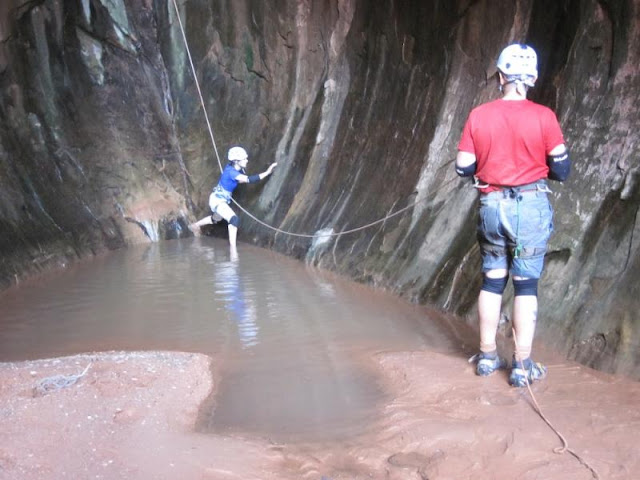 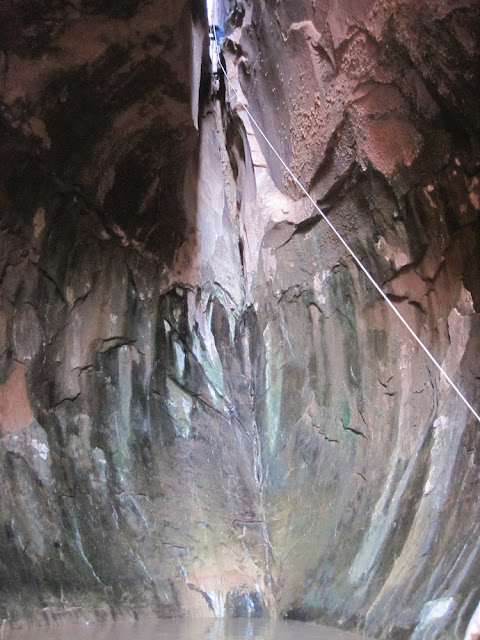 The Kelsey Exit wasn't nearly as bad as it looks. We watched the last of the daylight march across Butler Canyon as we climbed it.

Was Shenanigans an awesome canyon? Certainly. Would I do it again? No way.
Posted by Bob Allan at 11:00 AM