The night before we descended Tiger Canyon, Jim Clery shared his story about passing the group of seven canyoneers that was killed in Keyhole Canyon by a flash flood this past summer.

Jim and his group were the last people to see the Keyhole Seven alive.

It was sobering to hear his account.
It planted nervous seeds in all of our minds as dark menacing clouds passed overhead.
___________

On April 15th, 2016, Tom Collins, Mark Burnham, Steph and I completed an exploration of what we call the Tiger Route. Sam Goodhue and Tony Long were the rim team. Jim had to leave a day early, so he did not join us on this day.

When morning arrived the weather was windy and cold. Black clouds loomed in the distance. I was feeling antsy, eager to do an exploration after sitting on the sidelines the day previous.

Each of us seemed nervous and hesitant. We did not want the rim team to suffer excessively in the cold, so we all agreed that the upper reaches of Tiger were overkill. We thoroughly scouted the lower section of the drainage, looking for X-rated stemming or any signs of enormous potholes. The canyon looked reasonably friendly from above.

Steph, Tom and I rapped into the drainage and immediately donned wetsuits. We splashed down a section of easy obstacles, communicating with the rim team above about the weather. Soon, Tom, Steph and I reached a deep keeper pothole.

Tom went in first, followed by Steph. I stayed out in case we needed to reverse. Then Tom boosted Steph out, in fine form: 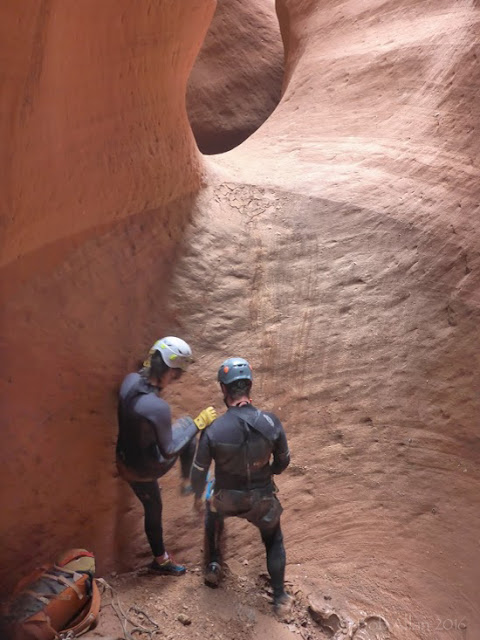 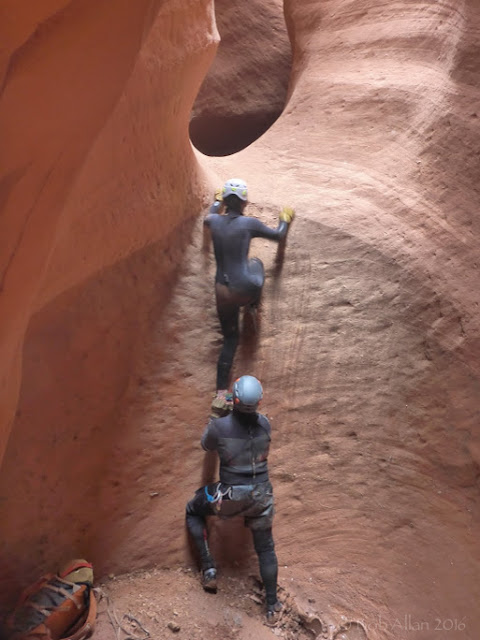 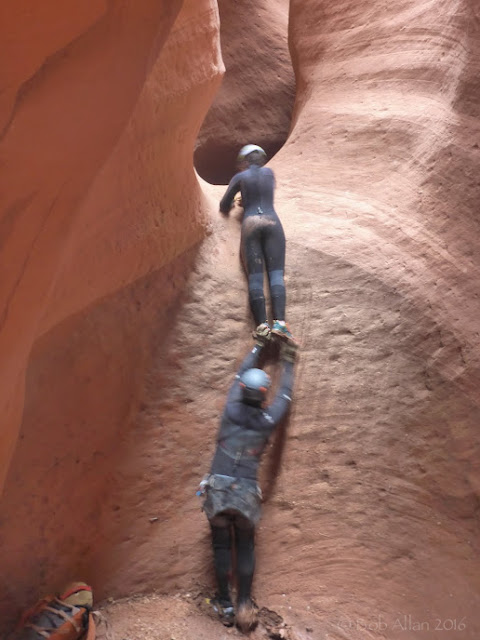 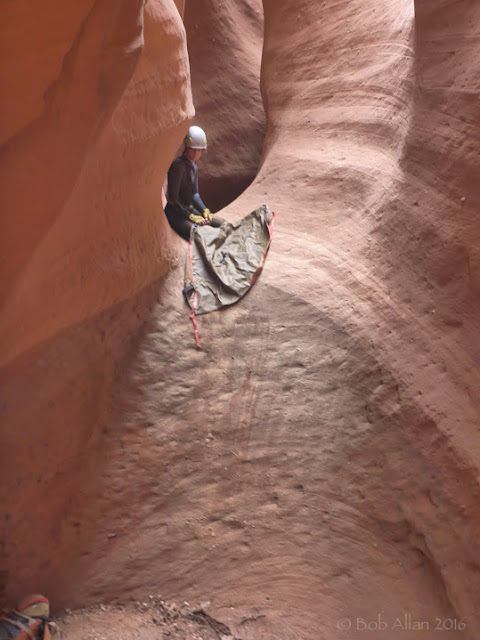 On the far side of the pothole was an overhung 30 foot rappel into a water filled chamber. I farmed some sand for the Sandtrap, crossed the pothole, then rapped off Steph into the chamber. Steph and Tom set up a hanging Sandtrap on the exit wall of the pothole, then Tom rapped into the chamber with me. Steph came down last while giving me precise instructions to dump the sand out of the Trap while she unweighted it. It worked like magic, a symphony of technique, and Steph was the conductor. 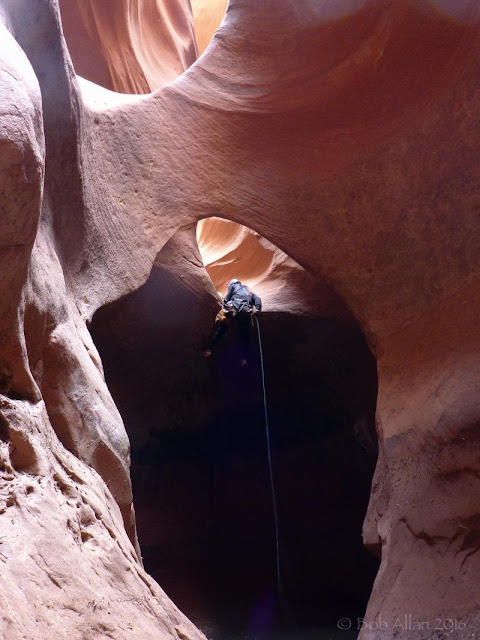 The inside of the chamber was amazing. Three large bridges crossed the span within, impossible to photograph all at once. The sounds of our awestruck voices tortured the rim team above. The sun momentarily showed its face, prodding Mark to join us, so he rapped in just below the chamber then hiked upstream to get a peek.

Then we headed downstream and turned a corner to behold the biggest keeper pothole, by double, that I’ve ever seen. My first and only thought was, “That pothole is going to stop us. Thank God we have a rim team.”

Tom and Mark instantly went into Potshot throwing mode. The entry side of the keeper was somewhat similar to the Pit of Despair, so they already had a plan for this. They took turns bracing and throwing half-full potshots. Each came up short, but not for lack of effort or technique. I’m certain they could have made the throws with one-third full potshots. 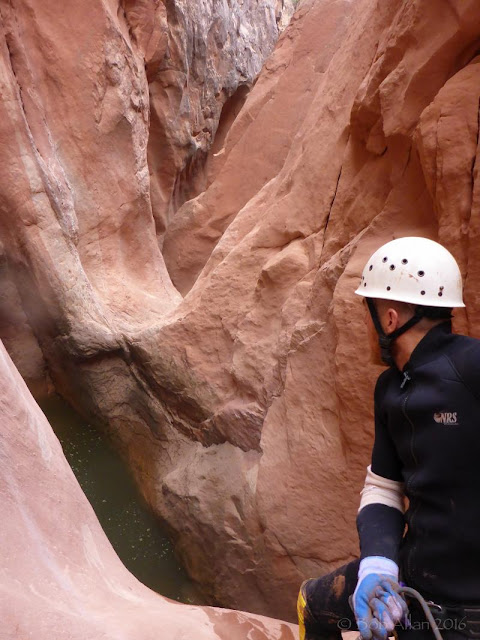 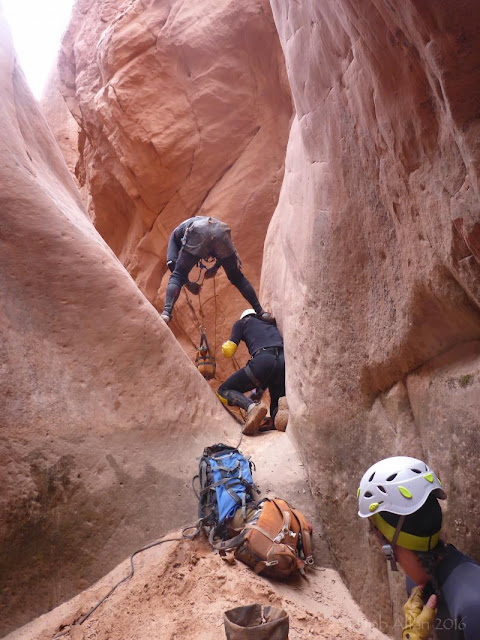 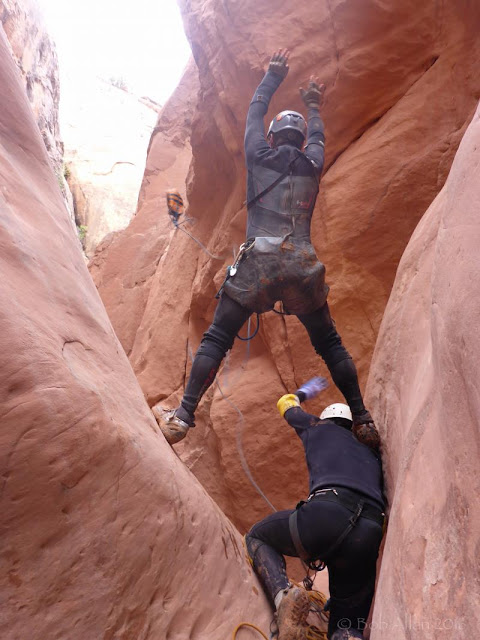 After a few throws, Mark went into the pothole to retrieve a potshot and rope that had fallen in. He soon discovered that the water was not quite as deep as it looked. He grabbed the wet potshot and gave it a throw. Missed. Again. Made it! Then he threw another and it stuck! Whew!! 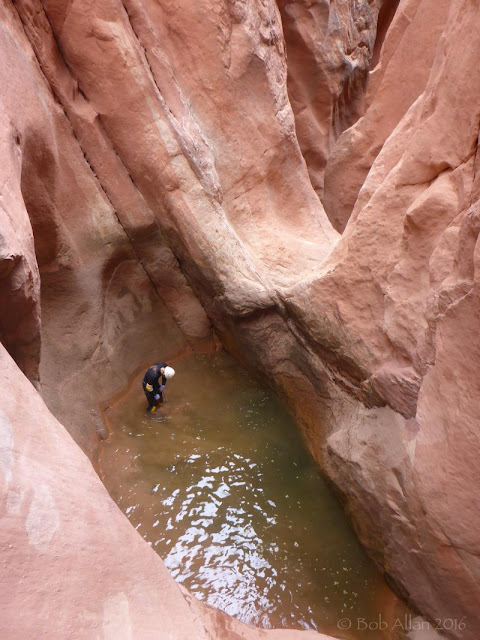 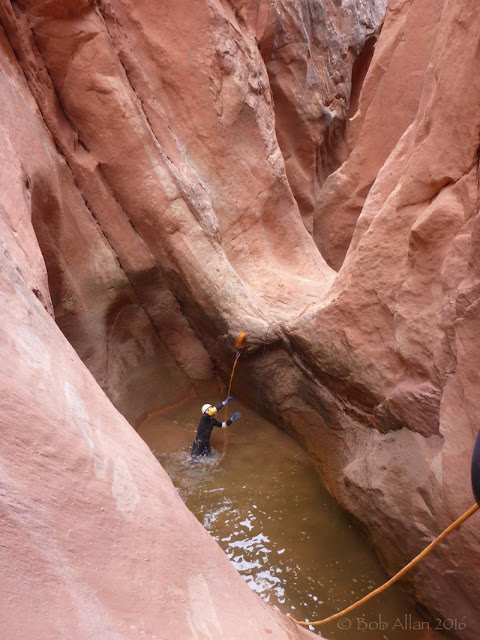 Once Mark was certain the Potshots would hold, he batmanned up the overhung lip holding just two lines!! WHOA!!! Victory! We rapped into the monster pothole off of a Sandtrap then overcame the exit lip using various non-batmannish methods. We shouted to the rim team that we had conquered the pothole. They said they were going to head back to camp because they could no longer traverse the top of the canyon above us. This sounded agreeable to all of us.

We headed down another drop, then stuck a Sandtrap. Mark upclimbed the drop and heroically retrieved it, then downclimbed the drop (amazing!). We were feeling pretty good about what we had just accomplished. We were at the Lion/Tiger junction, faced with a straightforward 40 foot rappel from a Sandtrap into the familiar narrows of Lion.

Then it began to rain.

Adrenalin surged as we all kicked into a higher gear. I rapped off Tom into Lion, then he threw down a 100 footer for me to rig at a bolted rappel downcanyon. I set the rope at the bolts and was down the rope in an instant. There I waited.

Then it began to rain hard. Then rain then turned to sleet.

Ten minutes was a very long time to stay put while staring the Grim Reaper in the eye. That same ten minute span was a very short time to set up a Sandtrap, send three people, then retrieve the Trap. I’m impressed and thankful they were so damn fast.

The next 350 yards of canyon was a blur of teamwork, panic and speed. What took an hour during the first visit flew by in about ten minutes. We bombed down slides and downclimbs without regard to limb, only regard to life. There was a moment when the canyon channeled each of us through a shower of rainwater that streamed disconcertingly from the top of the slot onto the narrow floor below. It was truly the stuff of nightmares.

The cathedral was an evil place compared to the first visit. Water trickled in from high above, so there was no time to marvel at its beauty. We ran through and jumped the last drop. We had survived the Tiger route. WHEW!

Soon we were all back at camp. All of the aches and pains from the trip were temporarily numbed by adrenalin. We were (and are) quite happy to be alive. 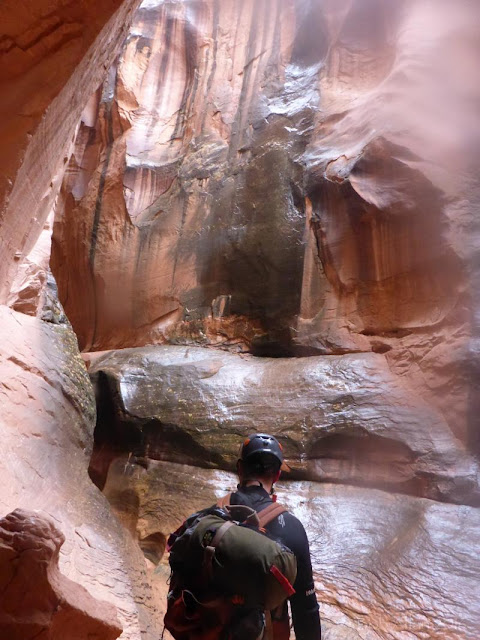 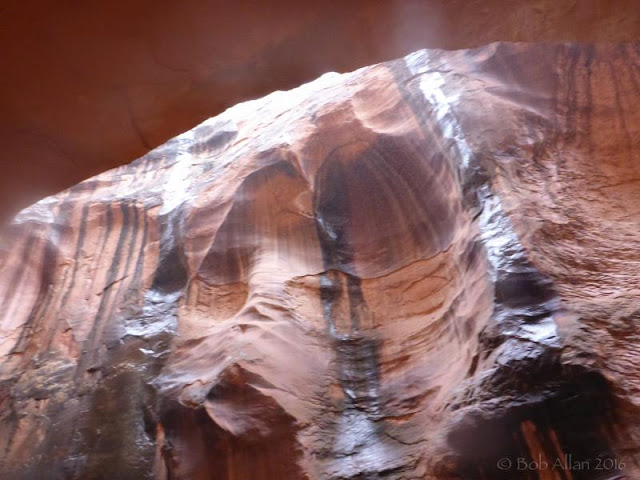 We entered the canyon here, rapping from meat: 36 55 47 N 111 02 30 W
There are two big keeper potholes in this canyon. Both must be handled with care.
A rim team is suggested for this route. If the biggest keeper were ¾ full, it could easily stop a group.
One Sandtrap is required.
3 Potshots are recommended.
The longest rap is about 40 feet, but you will need a couple of longer ropes for conquering the potholes. A couple of 100 footers and a short rope should work well.
The rappel after the biggest keeper can be downclimbed by the highly skilled.
Tiger joins Lion just before the bolted anchor in Lion.