On October 11th, 2019, Tony, Cara, Steph and I planned to enjoy a rest day in Micro Death Hollow.  It had been 6 weeks since it had last rained in Escalante, but we packed our wetsuits just in case.

We rigged our rope at the top of the 280 foot rappel, then threw it down.

We all took a deep breath.  It was obviously time to put our wetsuits on.  The morning was cold, so we spent a few minutes talking about what possibly awaited us below.  We had heard tales about a very difficult pothole.  Possibly half-full of freezing water?  The prospect seemed grim.  Maybe coming back another day was the best idea.

Steph had the foresight to bring a 7mm suit, even though she had a thinner wetsuit available.  She also brought a puffy jacket to wear over her wetsuit.  She is good at staying warm.

She decided to go down and check out the pothole, knowing full well that she might have to ascend the long rope.  With some trepidation, we listened quietly as Steph descended...

Echoed up from far below.  Steph doesn't normally phrase things that way.  Our imaginations ran wild.

Steph communicated what she saw - a small platform just behind a monstrous pothole.  It was 13 feet deep with a severely overhung exit lip, featureless and coated with slick mud.  Then she rapped down into the pothole to discover waist-deep water with mud that surrounded her ankles and shins.  It was messy and stinky, but the risk of hypothermia was low.

Tony rapped down next, with about 50 lbs of full PotShots in his pack.  Not an easy task.

For the next two hours Steph and Tony battled the pothole.  Steph tried to escape while standing on Tony's hands - but was not successful.  Many PotShots were thrown and many slid back in.  The tiny throwing area limited Tony's ability to throw for distance, and the tiny landing area limited which Potshots would stick.

While Cara and I were waiting up top we noticed a tree on the left downcanyon side that would probably let us rappel down into the canyon just past the pothole, so we pulled the rope up and re-rigged the rappel at that vantage point, being extremely careful not to pull any rocks.

Cara and I then rappelled into the slot and came down about a foot past the pothole (!!).  About that time Steph figure out that one of the PotShots was really stuck (a good thing).  At that point she was pretty covered with mud, but was still determined to defeat the pothole.

Cara and I didn't touch the stuck PotShot and gave her one last try at it.  With much determination, she got her ascender up and over the lip of the pothole, then climbed out under her own power.  SUCCESS!!

We discovered a LOT of water in the rest of the canyon, two swimmers in fact.  I didn't bother with a wetsuit for the first one and suffered badly.  There was ice floating in the second one, which was a long swimmer down a hallway, so I put on my 3/2 wetsuit and suffered almost as badly.  Lesson learned!! :)


We did not take many photos because we were trying to get through the water quickly.
Steph doing battle with a monster: 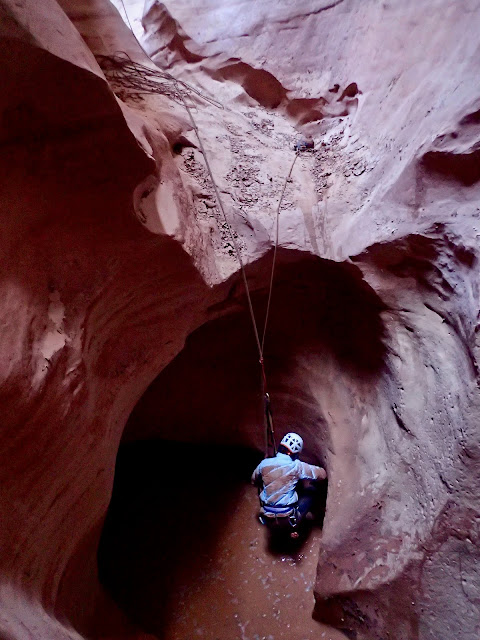 And Steph beating that monster, fair and square: 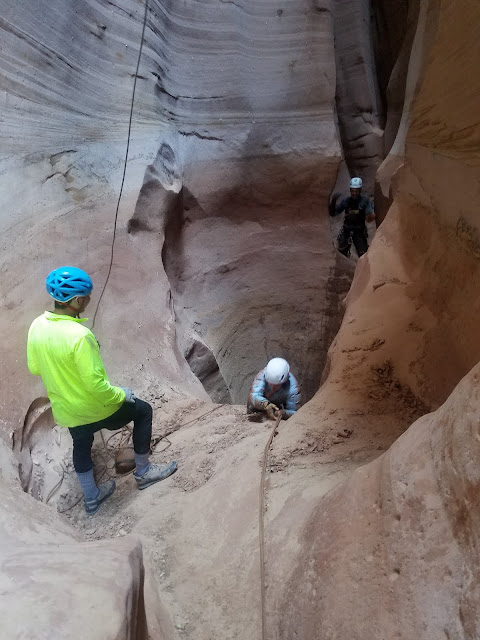 This canyon can hold water for a very long time and change dramatically with each flood.

The landing zone for our PotShots had one lucky rock that snagged our rope.
There is no guarantee that it will be there to snag ropes in the future.

Hooks might have helped, but we didn't see any useful features.

Even though the daytime high was 70 degrees, there was still ice in the canyon.

There is an alternate entrance to this canyon on the LDC side called Dirty Jobs,
which looks more fun than dealing with the pothole at the top of the watercourse.
We will try that next time. 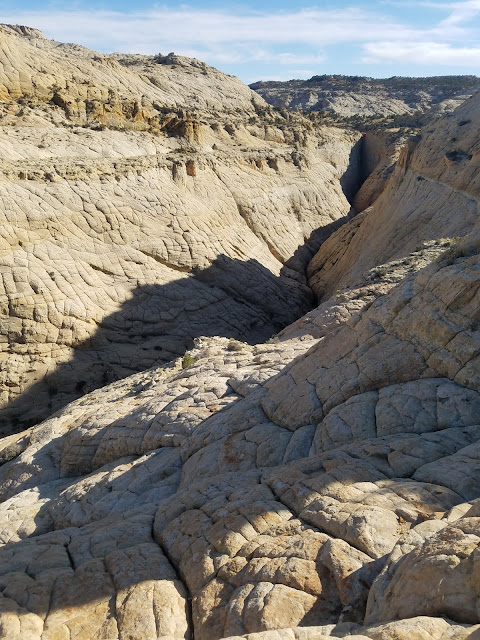